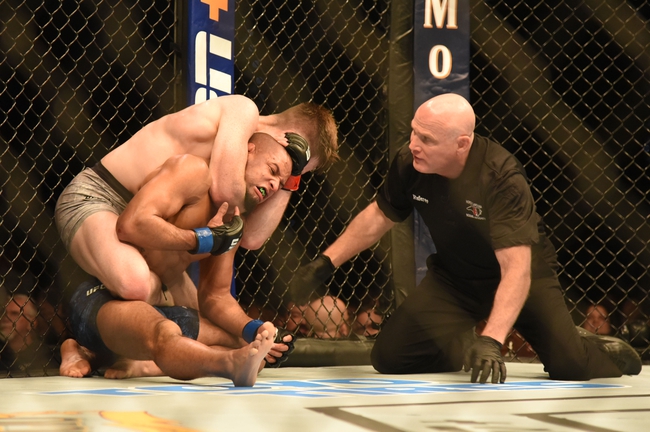 Herbert Burns and Daniel Pineda face off in a featherweight showdown at UFC 252 at the UFX Apex in Las Vegas.There will be no fans in attendance for this fight. Both of these fighters are currently unranked.

Herbert “The Blaze” Burns comes into this fight with an 11-2 record and since coming into the UFC he has won two fights in a row. Burns has fought twice so far this year, and each of his two fights have been finished. Burns last fight came against Evan Dunham and it didn’t take long in the first round to lock in a rear naked choke, and that led to a victory. In Burns fight inside the UFC, he faced off with Nate Landwehr and that one halfway through the first round, he finished the fight by knockout.

Burns is a complete fighter but each of the first two fights he has gotten it to the ground, something he will probably try to do again in this one. Burns is averaging 2.60 significant strikes per minute while absorbing 3.67 significant strikes per minute. Burns is also 100 percent on his takedown attempts and 100 percent against his opponents' takedown attempts.

On the other side of this matchup is Daniel “The Pit” Pineda who comes into this fight with a 26-13 record overall and he is a UFC veteran, but he hasn’t fought in the UFC since 2014. Since that point, Pineda has been fighting a lot better. Each of his last two fights have been no contests, but before that he had won four fights in a row. Two of those fights were won by knockout and the other two wins were by submissions.

Burns is no doubt the better fighter and he is going to have no issue getting the job done in this one. Pineda’s chin has proven to not be up to par at times, and in this one, Burns is going to dominate this fight.