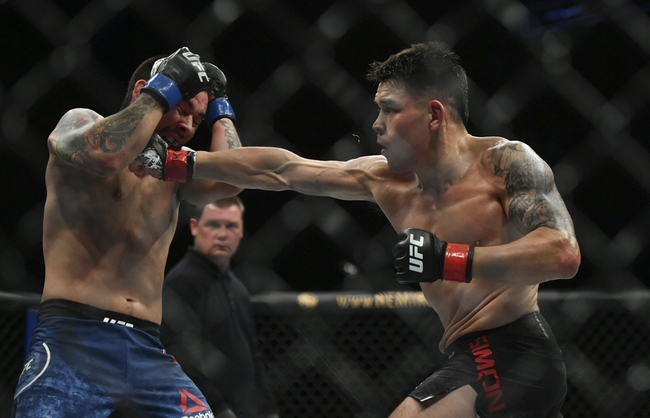 Ray Borg and Maness face off in a light bantamweight showdown in the main event of UFC Fight NIght 173 at the UFC Apex, in Las Vegas Nevada. These are both fighters who are currently unranked.

Ray “The Tazmexican Devil” Borg comes into this fight with a 13-5 record and coming into this one he has won two of his last three fights. The one loss though for Borg during that stretch did come in his last fight back in May. In that fight, Borg was taken down seven times and outstruck which caused him to lose by split decision.In Brog’s last fight he couldn’t get any takedowns which was a bit surprising because that usually his goal number one for him.

Borg comes into this fight averaging 1.52 significant strikes per minute while absorbing 1.92 strikes per minute. Borg likes to get the fight to the ground averaging 3.88 successful takedowns every 15 minutes and he is successful 50 percent of the time. Borg also stops 46 percent of his opponents takedown attempts. Borg also is averaging 1.0 submission attempts every 15 minutes, In this fight Borg needs to get the fight to the ground.

Nate “Mayhem” Maness will be making his UFC debut on Saturday night in this fight. Maness comes into this fight with an 11-1 record and his only loss came two fights ago in May of 2019. Maness’s last fight came in February against Kellen VanCamp and early in the first round of that fight, Maness was able to come away with a victory.

Maness is a well rounded fighter that can find a lot of success in many different ways. Coming into this one Maness has had four wins by knockout, two wins by submission, and the other five wins have come by decision.

Borg is a big favorite in this fight and for good reason, he is the much better fighter in this one. Look for Borg to get the fight to the ground early and then control the fight. He might not win before the 15 minutes is up, but he is going to win this fight on the money line.

Get Premium Picks Start Winning Now »
The pick in this article is the opinion of the writer, not a PickDawgz site consensus.
Previous Pick
Robert Whittaker vs. Darren Till 7/25/20 UFC on ESPN 14 Pick and Prediction
Next Pick
Frankie Saenz vs. Jonathan Martinez - 8/1/20 UFC Fight Night 173 Pick and Prediction