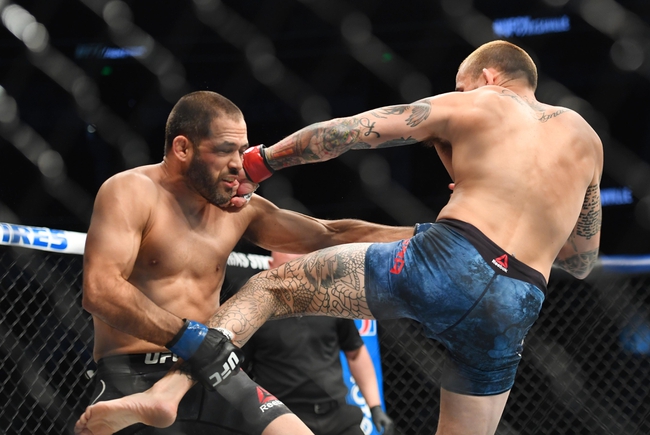 Frankie Saenz and Jonathan Martinez face off in a bantamweight showdown in the main event of UFC Fight NIght 173 at the UFC Apex, in Las Vegas Nevada. These are both fighters who are currently unranked.

Frankie Saenz comes into this fight with a 13-6 record overall and coming into this fight he has won two of his three fights.The one loss during that stretch for Saenz was all the way back in March of 2019. Saenz’s last fight was against Marlon Vera and in that fight early in the first round he was finished by knockout. Each of Saenz’s last two wins were by decision and one of those wins was by split decision.

Saenz comes into this fight averaging 3.97 significant strikes per minute while absorbing 3.15 significant strikes per minute. Saenz is also averaging 1.77 successful takedowns every 15 minutes but he is only successful on 32 percent of the attempts. Saenz also stops 62 percent of his opponents takedown attempts. Saenz doesn’t try submissions a lot, but he at times will try to end a fight that way. Saenz is averaging 0.1 submission attempts every 15 minutes.

Jonathan “Dragon” Martinez comes into this fight with an 11-3 record and since coming into the UFC he has a 2-2 record. After opening his UFC career with a loss, Martinez won two fights in a row, before losing his last fight against Andre Ewell back in February of 2020. In that fight, Martinez was outstruck 80-66 but he came away with a split decision loss. Martinez’s last win came in July of 2019, a fight he won by knockout.

Martinez is averaging 3.67 significant strikes per minute while absorbing 3.45 significant strikes per minute. Martinez is also averaging 0.51 successful takedowns every 15 minutes and 0.0 submission attempts. One place that Martinez really struggles is when his opponents try to get the fight to the ground. Martinez needs to try and keep the fight on the feet.