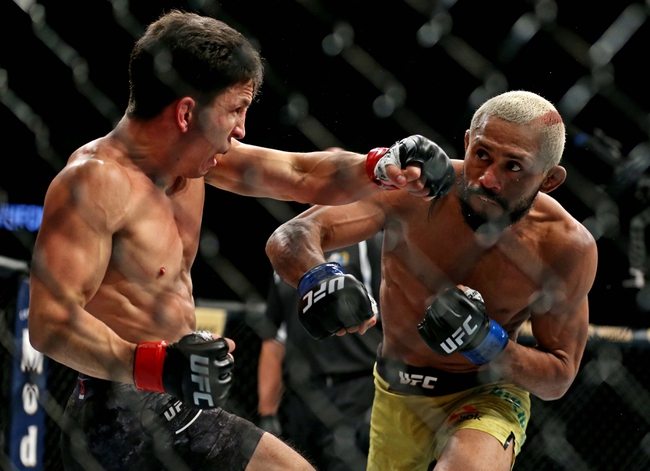 Deiveson Figueiredo and Joseph Benavidezface off in a flyweight title bout at UFC Fight Night which will take place at UFC’s Fight Island in Abu Dhabi United Arab Emirates. Like the last few events, there will be no fans in attendance for this event. Figueiredo is ranked number one while Benavidez is ranked second.

Figueiredo is averaging 2.54 significant strikes per minute while absorbing 2.76 significant strikes per minute. He also averages 1.81 successful takedowns every 15 minutes and he completes 50 percent of his attempts. Figueiredo also stops 61 percent of his opponents' takedown attempts. Figueiredo is also averaging 2.4 submission attempts every 15 minutes. In Figueiredo’s last fight, he actually probably fell behind against Benavidez before getting the knockout.

Even though Benavidez lost his first fight against Figueiredo this is a great chance for him to get some revenge. Benavidez is going to get out to a fast start again, and this time he is going to finish the job. At plus money, this should be a great chance to end the night with a big payout.

Get Premium Picks Start Winning Now »
The pick in this article is the opinion of the writer, not a PickDawgz site consensus.
Previous Pick
Jack Hermansson vs. Kelvin Gastelum - 7/18/20 UFC Fight Night 172 Pick and Prediction
Next Pick
Best Parlay Bets UFC on ESPN 14 7/25/20 Pick and Prediction