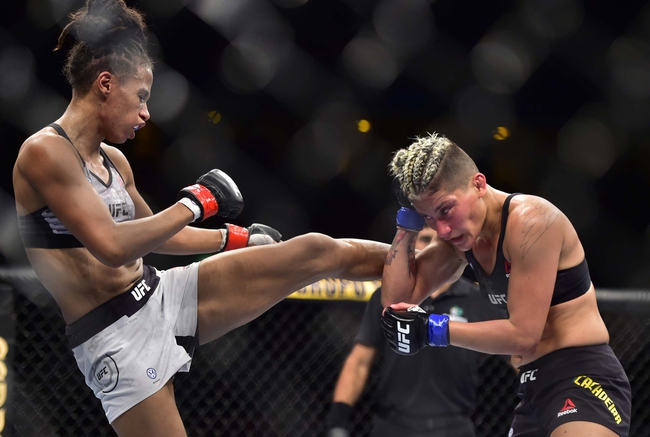 Ariane Lipski and Luana Carolina face off in a women’s flyweight bout at UFC Fight Night which will take place at UFC’s Fight Island in Abu Dhabi United Arab Emirates. Like the last few events, there will be no fans in attendance for this event. Both of these fighters are currently unranked.

Ariane “Queen of Violence” Lipski comes into this fight with a 12-5 record overall and since coming into the UFC she has a 1-2 record overall. Coming into the UFC there were high expectations for Lipski but each of her first two fights ended in a defeat. The last loss came in June of 2019 against Molly McCann. In that fight, Lipski was outstruck 108-68 and she was taken down two times.

Lipski’s last fight in the UFC was her only win. In November of 2019, Lipski fought against Isabela da Padua and Lipski outstruck her 31-15. Lipski was taken down two times in that fight, but she was still able to come away with a unanimous decision. Lipski is averaging 3.38 significant strikes per minute while absorbing 4.62 significant strikes per minute. Lipski has only had one takedown during her UFC career but her only takedown attempt was successful.

Luana “Dread” Carolina comes into this fight with a 6-1 record and since coming into the UFC she has one win. Her one fight in the UFC came against Priscila Cachoeira and in that fight, Carolina outstruck her opponent 111-69. Carolina tried three submission attempts in that fight and even though she didn’t finish any of them, she still came away with a unanimous decision. Carolina is averaging 6.53 significant strikes per minute while absorbing 3.83 significant strikes per minute.

Carolina looked very good in her first fight in the UFC and she is going to give a ton of damage to Lipski in this one. Carolina might not get the finish in this fight, but she is going to have no issue coming away with a victory.If you are looking for a play on the total rounds, look for this one to go the distance.