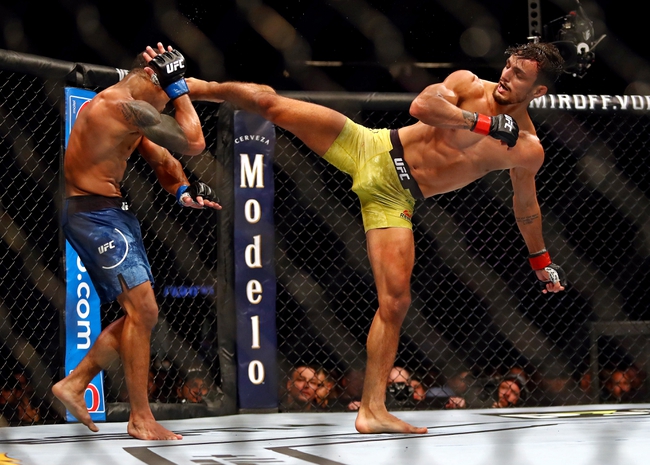 Ricardo Ramos and Lerone Murphy face off in a featherweight bout at UFC Fight Night 172 which will take place at UFC’s Fight Island in Abu Dhabi United Arab Emirates. Like the last few events, there will be no fans in attendance for this event. Both of these fighters are currently unranked.

Ricardo Ramos has had a lot of success during his career. Ramos comes into this fight with a 14-2 record overall and since entering the UFC he has won five of his six fights. Each of his last two fights he has won, with the last victory coming in November of 2019 against Eduardo Garagorri. In that fight he had two takedowns almost four minutes into the first round, Ramos finished the fight with a rear naked choke. That was his first win by submission since entering the UFC.

Lerone “The Miracle” Murphy comes into this fight with eight wins and one loss and the only loss came in his last fight. Coming into the UFC, Murphy had won eight fight in a row, and there was a lot of confidence heading into that fight.

Murphy’s last fight came against Zubaira Tukhugov in September of 2019 at UFC 242.Murphy was competitive in that fight, but he was taken down six times in that fight and that led to a split decision loss. In this fight he is facing a competitor that wants to get the fight to the ground, and he is going to need to be better in that.

Get Premium Picks Start Winning Now »
The pick in this article is the opinion of the writer, not a PickDawgz site consensus.
Previous Pick
UFC on ESPN 40: Thiago Santos vs. Jamahal Hill Picks and Predictions
Next Pick
Al Iaquinta vs. Dan Hooker - 10/5/19 UFC 243 Pick, Odds, and Prediction