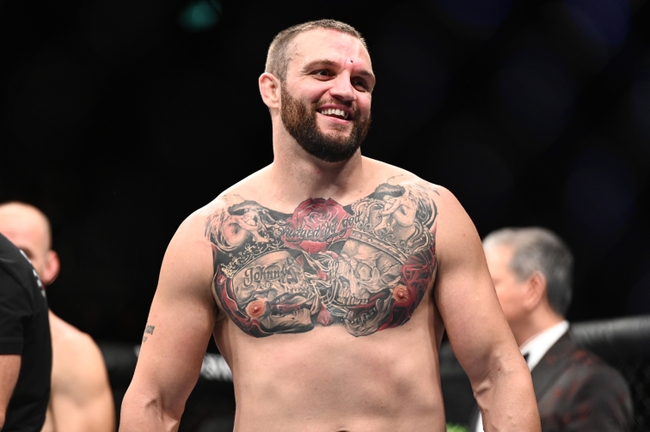 John Phillips and Khamzat Chimaev face off in a middleweight bout at UFC Fight Night 172 which will take place at UFC’s Fight Island in Abu Dhabi United Arab Emirates. Like the last few events, there will be no fans in attendance for this event. These are both guys who are currently unranked. This is the last event of the prelims.

John “The Welsh Wrecking Machine” Phillips comes into this fight with a 22-9 record but his start to the UFC has had some struggles. Phillips lost his first three fights in the UFC before winning his last fight in September of 2019 against Alen Amedovski. In that fight it only took Phillips 17 seconds before he finished the fight with a knockout.

One problem with Phillips since coming into the UFC is he has taken a lot of damage. Phillips is averaging 2.64 significant strikes per minute while absorbing 5.01 significant strikes per minute. He hasn’t had any takedowns since coming into the UFC and he only stops 14 percent of them when his opponents tries them. For Phillips to win this fight he needs to keep it on the feet and he needs to try and get that one punch to finish the deal. It might be hard for him to grind out a fight.

Khamzat Chimaev took this fight on short notice and has moved up from welterweight to to middleweight to take this fight. Chimaev is considered one of the top European prospects, but this fight isn’t going to be an easy task. Chimaev comes into this fight with a 6-0 record and his last win came in October by submission.

One of the shocking things about the last fight was it went to the second round. Four of his six fights have been finished in the first round, and in this one he will be hunting for the finish early. If he can’t get it though, he can’t be discouraged.

Chimaev is no doubt the better fighter, but his odds are crazy and there is no value with taking him on the money line. Look for Chimaev to win the fight by knockout to get the price down a little bit.