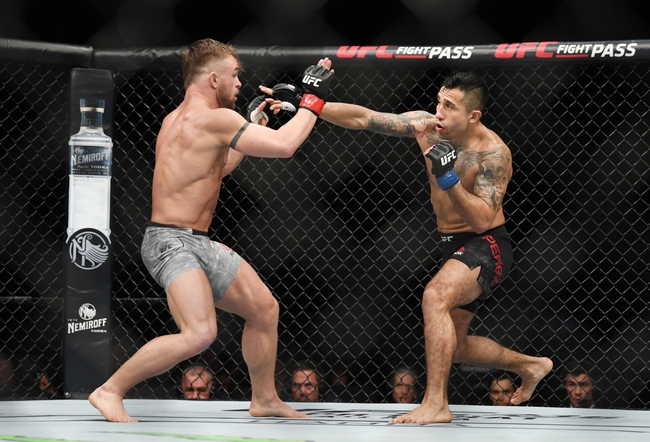 Jimmie Rivera and Cody Stamann face off in a featherweight bout at UFC Fight Night 172 which will take place at UFC’s Fight Island in Abu Dhabi United Arab Emirates. Like the last few events, there will be no fans in attendance for this event. Rivera is currently ranked ninth in the division, while Stammann is ranked 10th.

Jimmie “El Terror” Rivera looked like he might be making a run up the rankings to a title fight until his last couple of fights. Overall Rivera has a 22-4 record but each of his last two fights ended in defeat. Rivera’s last fight came against Petr Yan in June of 2019. In that fight, Rivera actually outstruck Yan, but he was takedown down one time and didn’t have great control over the fight, something that led to him losing by a unanimous decision.

Cody “The Spartan” Stamann comes into this fight with a 19-2-1 record overall but coming into this fight he has gone 2-2 over his last four fights. In his last fight, Cody Stamann did come out with a win on June 6th, 2020 against Brian Kelleher. In that fight, Stamann outstruck Kelleher 89-57 and had two takedowns, which was enough to come away with the victory.

Rivera has struggled the last couple of fights and that is going to let them down in this game. Look for Stamann to control the fight with his takedowns and that will be enough to come away with the victory.