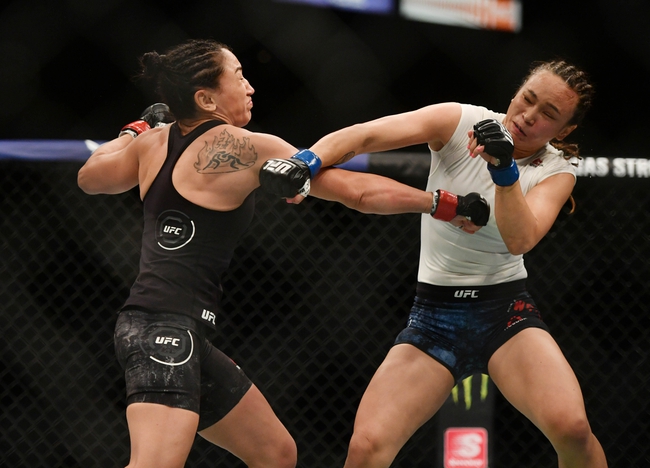 Carla Esparza and Marina Rodriguez face off in a women’s strawweight bout at UFC Fight Night 172 which will take place at UFC’s Fight Island in Abu Dhabi United Arab Emirates. Like the last few events, there will be no fans in attendance for this event. Esparza is ranked seventh in the division while Rodriguez is ranked ninth.

Carla “Cookie Monster” Esparza overall has a 17-6 record and coming into this fight she has won three fights in a row. The last fight for Esparza came in May of 2020 against Michelle Waterson. Esparza outstruck Waterson by one in her last fight and had a takedown and that was enough to come away with a split decision victory. The fight before that for Esparza was a majority decision, and three fights ago it was a unanimous decision. Esparza’s last win before the final horn was in December of 2014 against Rose Namajunas.

Marina Rodriguez comes into this fight having 12 wins and two draws. She still hasn’t lost a fight and since coming into the UFC she has won two fights and the other two have ended in a draw. Her last fight she was taken down three times and outstruck, but she was still able to get a draw. Rodriguez is averaging 5.60 significant strikes per minute while absorbing 3.57 significant strikes per minute. She is also averaging 0.48 successful takedowns every 15 minutes and 0.2 submission attempts during the same period. Rodriguez would like to keep the fight on the feet and in this one, she needs to make sure her takedown defense is good.