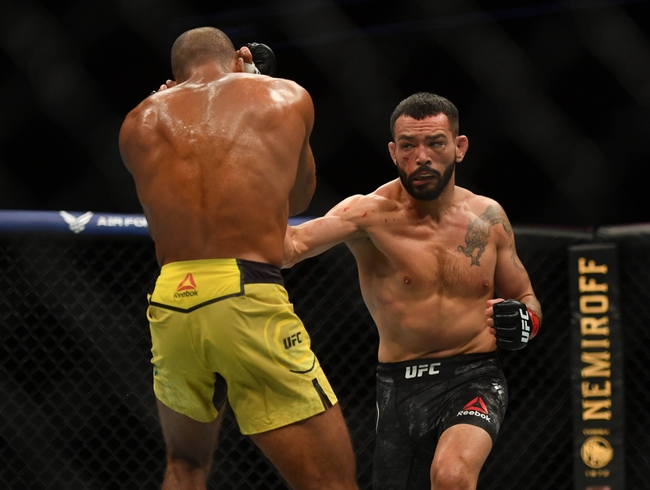 Calvin Kattar and Dan Ige face off in a featherweight bout for the main event at UFC FIght Night 172 which will take place at UFC’s Fight Island in Abu Dhabi United Arab Emirates. Like the last few events, there will be no fans in attendance for this event. Kattar is currently ranked number sixth in the division while Ige is ranked 10th.

Calvin Kattar comes into this fight with a 21-4 record and since coming into the UFC he has a 5-3 record. After losing two fights in a row, Kattar got back in the right direction in his last fight against Jeremy Stephens. In that fight in May of 2020, Katter was actually being outstruck in the second round when he landed an elbow that finished the fight. Each of his last three wins he has finished the fight with a knockout.

Since coming into the UFC, Katter is averaging 5.29 significant strikes per minute while absorbing 6.46 significant strikes per minute. Katter is about landing a lot of damage and he also absorbs a lot of damage throughout most fights. Katter mostly fights on the feet but he sometimes will take it to the canvas averaging 0.42 successful takedowns every 15 minutes. Katter also hasn’t tried a submission attempt since coming into the UFC.

Dan “Fifty K” Ige comes into this fight with a 14-2 record and is on a six fight win streak. Ige lost his first fight in the UFC but since that point has been undefeated. Ige has been playing with a little fighter as of late though with each of the last two wins coming by split decision. Ige’s last fight win came against Edson Barboza in May of 2020. Ige was actually outstruck in that fight, but he did have a takedown and that was enough to lock up the split decision win.

This is a step up in competition for Ige, but at this price, he is going to rise to the occasion. Look for him to get the fight to the ground, and grind out the fight enough to come away with a win, even if it’s another split decision.