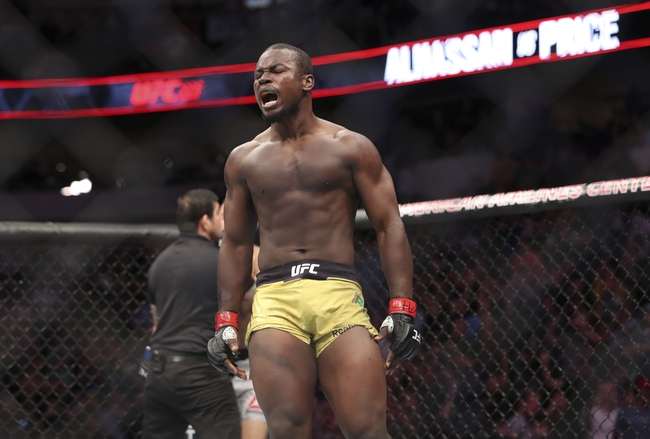 Abdul Razak Alhassan and Mounir Lazzez  face off in a welterweight bout at UFC Fight Night 172 which will take place at UFC’s Fight Island in Abu Dhabi United Arab Emirates. Like the last few events, there will be no fans in attendance for this event. Both of these fighters are currently unranked.

Abdul Razak Alhassan comes into this fight with a 10-1 record overall and since coming into the UFC he has gone 4-1. Alhassan comes into this fight having won three fights in a row but he has been out of the UFC since 2018. Alhassan’s last fight came in September of 2018 against Niko Price. In that fight Alhassan outstruck Price 15-4 and 43 seconds into the fight he finished the knockout. Each of his four wins in the UFC were by knockout. The only loss for Alhassan was in 2017 and that was by a split decision.

Mounir “Sniper” Lazzez will be making his UFC debut when he gets the start in this fight. Lazzez comes into this fight with a 9-1 record overall and he is a knockout artist. Eight of Lazzez’s nine wins have come by knockout, with the other win coming by a decision.

Lazzez’s last fight came in a Probellum MMA bout in February of 2020 and in that fight it was only 59 seconds into the fight when he finished the fight. In this fight Lazzez will come out swinging early and try to finish the job with some power punches. Don’t expect Lazzez to try and get this fight on the ground, he would rather keep this fight on the feet.

These are both fighters who have found a lot of success. In this one Lazzez is going to give Alhassan quite the challenge, but he isn’t going to do enough to get the job done. Look for Alhassan to wear down Lazzez and that will be enough to come away with a victory.