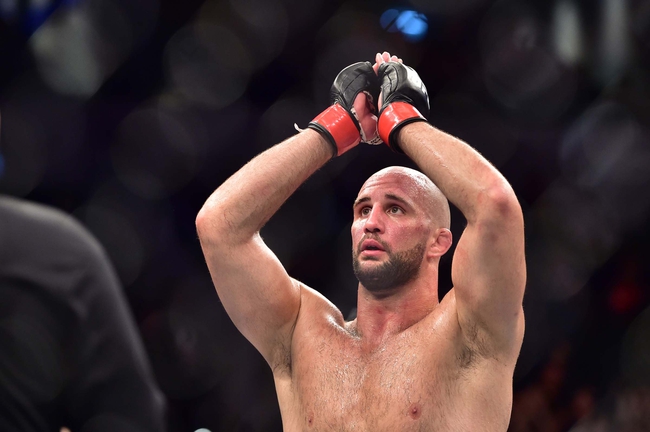 Volkan Oezdemir and Jiri Prochazka face off in a light heavyweight bout at UFC 251 which will take place at UFC’s Fight Island in Abu Dhabi United Arab Emirates. Like the last few events, there will be no fans in attendance for this event. Oezdemir is the number seven ranked fighter in the light heavyweight class while Prochazka is currently unranked.

Volkan “No Time” Oezdemir comes into this fight with a 17-4 record overall and he is riding a two game winning streak heading into this one. Since coming into the UFC he has a 5-3 record with the three losses all coming in a row.

Oezdemir’s last fight came in December of 2019. In that fight he took on Aleksandar Rakic and even though he was outstruck in that fight, he came away with a split decision. Oezdemir is averaging 4.88 significant strikes per minute while absorbing 4.14 significant strikes per minute. Oezdemir is averaging 0.39 successful takedowns every 15 minutes. The one thing he won’t be trying to do in this fight is finishing this fight by submission.

Jiri Prochazka will be making his UFC debut in this fight, but he has had plenty of experience fighting during his career. Prochazka overall in his career has 26 wins and only three losses, and coming into this fight he has won ten fights in a row. Prochazka’s last fight came in December of 2019 and that one didn’t take long to finish getting the job done 1:55 in the first round.

Prochazka is a knockout artist and 23 of 26 wins have come by knockout. In this fight there is no doubt he will come out swinging and try to get the job done early. Two of his three losses came by knockout so there is a good chance that is how this fight will be ending.

This is Prochazka’s fight in the UFC, but he still should find success. He has the knockout power that can finish it in one punch, and he is going to get the job done against Oezdemir. Take him on the money line, but for even added value. Taking him to win by TKO will cash too.