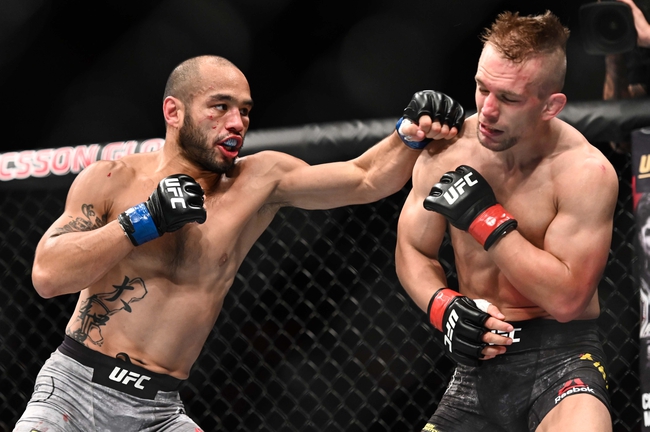 Leonardo Santos and Roman Bogatov face off in a lightweight bout at UFC 251 which will take place at UFC’s Fight Island in Abu Dhabi United Arab Emirates. Like the last few events, there will be no fans in attendance for this event. Both of these guys are currently unranked, but hope to make a statement with a win in this one.

The lightweight division is loaded with talent, but it’s still a bit shocking that Leonard Santos isn’t ranked at this point in his career. Santos comes into this fight with a 17-4-1 record overall and he has won five fights in a row. In the UFC Santos only has one loss and that was against Norman Parke all the way back in 2014. Santos last fight came against Stevie Ray in June of 2019. In that fight Santos oustruck him 12-2 and only two minutes and 17 seconds into the fight he landed the big punch that put out Ray’s lights

Roman Bogatov will be making his UFC debut when he steps into the octagon in this one, and this is a big-time matchup. Bogatov was one of the best fighters in the M-1 when he signed his contract with the UFC. Bogatov has a 10-0 record since becoming a pro, and five of those of wins came by submission.

In this fight Bogatov is going to try and get control early, and probably try to finish it by submission. In his ten wins he has only had one knockout, so that’s probably something we won’t see in this one.

In this fight, the wrong person is favored. This is a big step up in competition for Bogatov but he is still going to find success in this one. Bogatov for him to lock in a submission early, and that will be enough to come away with the victory.