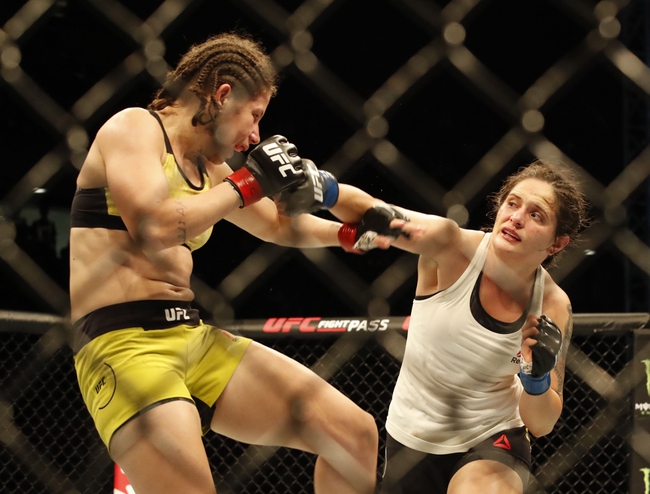 Karol Rosa and Vanessa Melo face off in a women’s bantamweight bout at UFC 251 which will take place at UFC’s Fight Island in Abu Dhabi United Arab Emirates. Like the last few events, there will be no fans in attendance for this event. Both of these ladies are currently unranked but this will be the first fight to ever take place at Fight Island.

Karol Rosa will be making her second fight in the UFC in this fight and overall he has a 12-3 record since becoming a pro. In Rosa’s first fight in the UFC, she won by a split decision, but one thing was clear, she isn’t afraid to throw punches in bunches. In that fight Rosa didn’t have a takedown but she did outstrike

Rosa is a balanced fighter who can finish fights in a couple of different ways. Rosa has been knocked out four times, he has had two submissions, and six of his fights have been a win by a decision. In his three losses, Rosa has lost two by submission and one by a decision. In her career, Rosa still hasn’t been a victim of a knockout.

Vanessa Melo overall has a 10-7 record but since coming into the UFC he has lost both of his fights. In Melo’s first fight inside the octagon, she was outstruck 125-68 and in the last fight she was outstruck 79-40 and she was taken down twice in that fight. Melo is also one who likes to throw a lot of punches, but she also takes a lot fo damage, which could be a big concern heading into this fight.

Melo doesn’t have a knockout yet in her career and only two of her ten wins have come by submission. If she wins this fight, it’s probably going to have to go the distance.

In terms of value, the price isn’t great with Karol Rosa but she is going to have no problem getting the job done in this fight. Look for Rosa to throw punches in bunches early and that will be the difference. It might go to a decision, but she is going to win by a unanimous decision.

Get Premium Picks Start Winning Now »
The pick in this article is the opinion of the writer, not a PickDawgz site consensus.
Previous Pick
Dan Hooker vs. Dustin Poirier - 6/27/20 UFC on ESPN 12 Pick and Prediction
Next Pick
Raulian Paiva vs. Zhalgas Zhamagulov - 7/11/20 UFC 251 Pick and Prediction