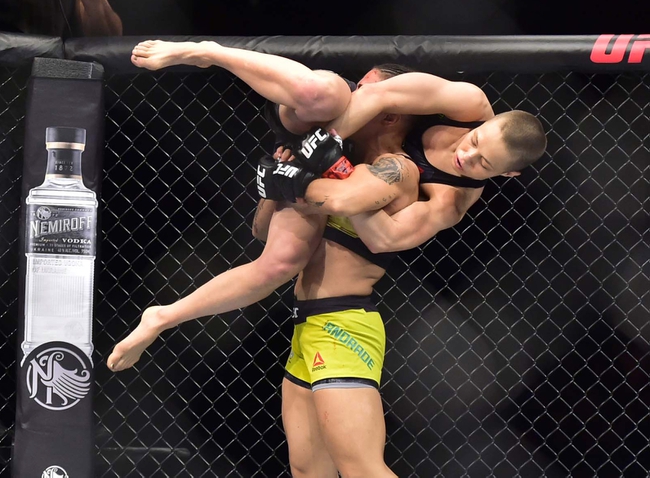 Jessica Andrade and Rose Namajunas face off in a women’s strawweight bout at UFC 251 which will take place at UFC’s Fight Island in Abu Dhabi United Arab Emirates. Like the last few events, there will be no fans in attendance for this event. Andrade is the number one ranked fighter in the class while Namajunas is ranked second. The winner of this fight is hoping for a title shot. These two fighters faced off in May of 2019 with Andrade coming away with a victory.

Jessica “Bate Estaca” Andrade comes into this fight with a 20-7 record overall and she had won four fights in a row heading into her last fight. In Andrade’s last fight against Weili Zhang she was outmatched from the beginning. Andrade took 29 significant strikes in 49 seconds and that type of damage wore her down and she was knocked out.

The two wins before that for Andrade were knockouts, and in this fight she is going to look for that knockout again. Andrade is averaging 6.55 significant strikes every minute while absorbing 5.28 significant strikes per minute. She also likes to get the fight to the ground averaging 3.21 successful takedowns every 15 minutes and she also averages 0.5 submission attempts during the same time period.

Rose “Thug” Namajunas had a layoff after that loss against Andrade but she is back and ready to try and get another shot at the title. Before her last fight, Namajunas had won three fights in a row, including two title wins over Joanna Jedrzejczyk. In her last win she was actually outstruck but by 40 punches, but she did have the one takedown and that was enough to get the decision her way.

Andrade won the first fight when these two matched up, but it’s going to be different in this one. Look for Namajunas to land some power punches early and she will win this fight by takeout. If you are comfortable with the money line number, take that, but if you are looking for extra value, take Namajunas to win by knockout.