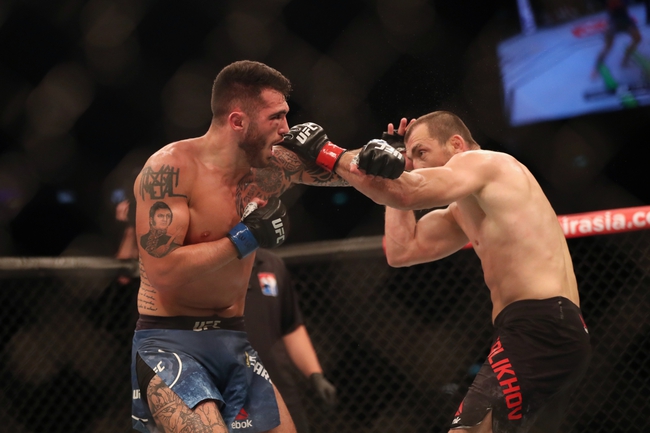 Elizeu dos Santos and Muslim Salikhov face off in a welterweight bout at UFC 251 which will take place at UFC’s Fight Island in Abu Dhabi United Arab Emirates. Like the last few events, there will be no fans in attendance for this event. Both of these guys are currently unranked, but hope to make a statement with a win in this one.

Elizeu “Capoeira” dos Santos comes into this fight with a 22-6 record overall and since coming into the UFC he has an 8-2 record. Dos Santos was riding a seven-fight winning streak before he lost two fights ago. dos Santos did get back on the right track in his last fight against Aleksei Kunchenko in March of 2020. In that fight dos Santos had two takedowns and outstruck Kunchenko and that was enough to come away with the unanimous decision. Dos Santos overall is averaging 4.17 significant strikes per minute while absorbing 3.13 significant strikes per minute. dos Santos is averaging 0.65 successful takedowns every 15 minutes but he isn’t very accurate averaging only 20 percent being successful.

Muslim “King of Kung Fu” Salikhov comes into this fight with a 16-2 record overall and since coming into the UFC he has won three of his four fights. Salikhov lost his first fight in the UFC but since that point has rattled off three wins. His last fight came against Laureano Staropoli came in October of 2019. In that fight the King of Kung Fu outstruck Staropoli by 21 significant strikes and he also had two successful takedowns. He wasn’t able to get the finish but he did win by a unanimous decision.

dos Santos has more power, but Salikhov knows he needs to get the fight to the ground and that’s what he will do. This fight is going to go to a decision with Salikhov coming away with a unanimous decision.