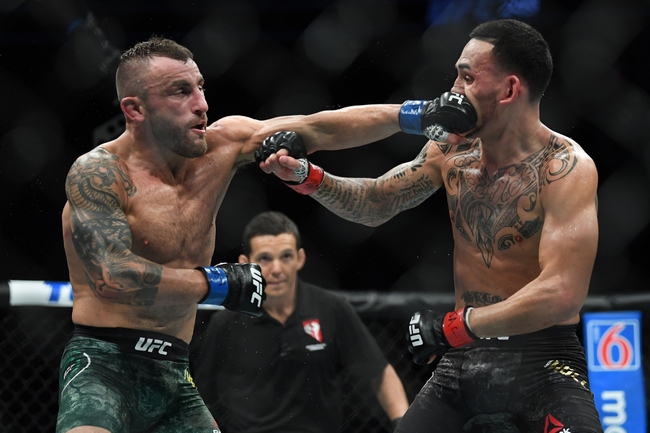 Alexander Volkanovski and Max Holloway face off for the featherweight belt at UFC 251which will take place at UFC’s Fight Island in Abu Dhabi United Arab Emirates. Like the last few events, there will be no fans in attendance for this event. Volkanovski is the defending champion while Holloway is the number one ranked contender.

Alexander “The Great” Volkanovski comes into this fight with a 21-1 record overall and since coming into the UFC he has an 8-0 perfect record. Volkanovski’s last fight came against Max Holloway and he will look to win his second win in a row against him in this one. In that last fight Volkanovski outstruck him 157-134 and that was enough for him to come away with a unanimous decision. Even though he won, there were some who believed that Holloway should have been named the victor.

Three of the last four wins for Volkanovski have come by unanimous decision with the other win being a knockout against Chad Mendes. The Great is averaging 6.15 significant strikes per minute while absorbing 3.14 significant strikes per minute. Volkanovski is averaging 2.16 successful takedowns every 15 minutes, but he is only successful on 34 percent of his attempts.

Max Holloway comes into this fight with a 21-5 record but in his last three fights he has two losses. The only win during that stretch for Holloway was against Frankie Edgar in July of 2019. The one thing about Holloway is he isn’t ever going to wear down and he can take a lot of damage. Holloway is averaging 6.66 significant strikes per minute while absorbing 4.45 significant strikes per minute. Holloway is averaging 0.24 successful takedowns every 15 minutes and 0.4 submission attempts during the same time period.

Volkanovski won the first fight between these two fighters, but this fight is going to turn out a little differently. Look for Holloway to learn from his struggles in the first fight and that will be the difference as he comes away with a victory. In this fight he will be the one wearing down Volkanovski and that will lead to a victory by Holloway.