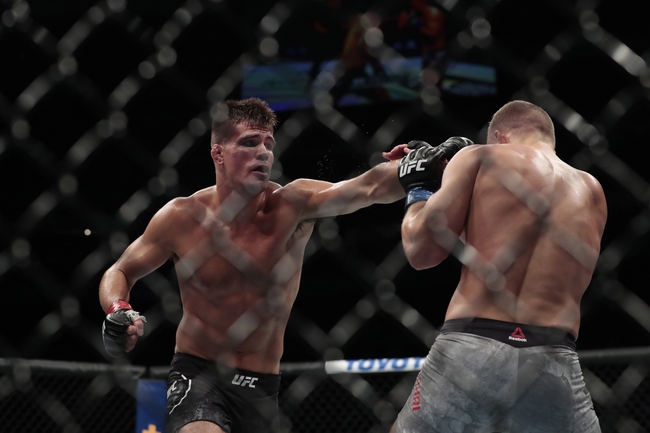 Mike Perry and Mickey Gall face off in a featherweight bout in the co-main event of the UFC on ESPN 12 at the UFC Apex in Las Vegas. Like the last few events, there will be no fans in attendance for this event. Both of these fighters are currently unranked in the featherweight division.

Mickey Gall comes into this fight with a 6-2 record overall and since coming into the UFC he has a 5-2 record. After losing two fights ago to Diego Sanchez, Gall bounced back in a big way against Salim Touahri in August of 2019. In that fight, Gall had 50 significant strikes and one takedown, which was enough to come away with the unanimous decision.

Mike Perry overall has a 13-6 record but he is really struggling coming into this fight. Perry has lost two fights in a row and five of the last seven. Perry’s last fight came in December of 2019 against Geoff Neal and it was only a minute and 30 seconds into the fight when he was knocked out.

Perry is averaging 4.27 significant strikes per minute while absorbing 4.50 significant strikes per minute. He is also averaging 0.61 successful takedowns every 15 minutes but he doesn’t try submission attempts. Each of Perry’s last two wins were by a decision. Even though Perry’s last two have come by a decision, he has knockout power and each of his first 11 wins came by knockout. For Perry, he will take it to the ground if he needs to, but wants to throw bombs and knees on the way to victory.

Perry might be the better fighter but with the way he has fought as of late, he doesn’t deserve to have this type of number laid with him Look for Gall to lock one of those submission attempts and that will be enough to come away with a victory.