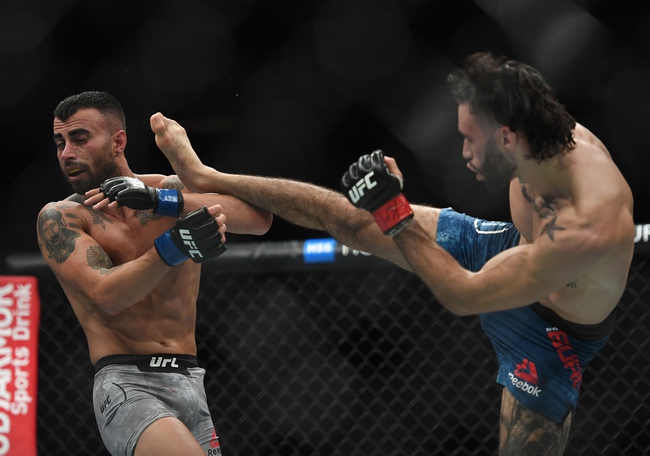 Josh Emmett and Shane Burgos faceoff in a featherweight bout at UFC Fight Night 173 at the UFC Apex in Las Vegas. Like the last few events, there will be no fans in the stands for this one. Emmett is currently ranked eighth in division while Burgos is ranked 10th in the division.

Josh Emmett hopes he can have a chance at a featherweight title here sometime soon. Coming into this fight Emmett currently sits with a 15-2 record and coming into this fight he has won two fights in a row. Emmett’s last fight came in July of 2019 against Mirsad Bektic. In that fight, Emmett won the fight by TKO late in the first round.

Shane “Hurricane” Burgos comes into this fight with a 13-1 record, and he has won six of his seven fights since coming into the UFC. Burgos last fight came against Makwan Amirkhani in November of 2019. Burgos was taken down three times in that fight, but he outstruck him 105-22. Late in the third round Burgos finished the fight with a knockout.

Burgos likes to stay busy in the octagon averaging 7.09 significant strikes per minute. With his style he does also take a lot of damage with opponents landing 5.34 significant strikes per minute. Burgos has a background in boxing and he is most comfortable. Burgos is averaging only 0.36 successful takedowns every 15 minutes, and he tries only 0.2 submission attempts during the same period.

If you like a fight where both guys are going to let their hands fly, this is a fight you don’t want to miss. Even though Emmett has looked better with the standup as of late, he still isn’t as skilled in that position as Burgos. Look for Burgos to wear down Emmett with the punches, and in the second or third round he is going to finish the job.