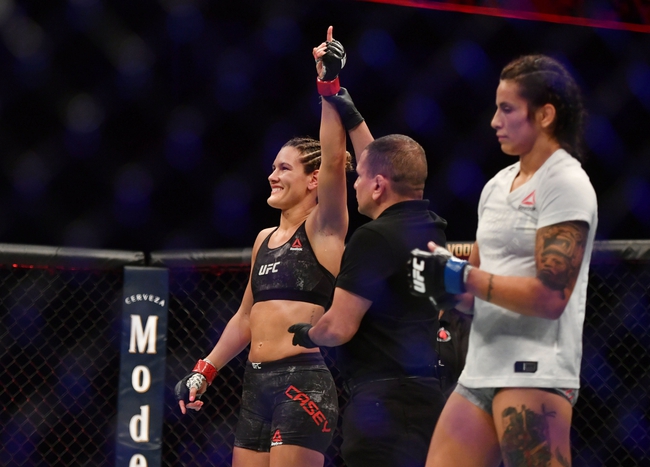 Cortney “Cast Iron” Casey comes into this fight with a 9-7 record and over her last three fights she has won two of them. Casey’s last fight came on May 16th 2020 against Mara Romero Borella. Casey tried two submissions in that fight and the second one finished with an armbar midway through the first round. The fight before though Casey lost a unanimous decision.

Casey is averaging 4.72 significant strikes per minute while absorbing 4.63 significant strikes per minute. Casey likes to keep the fight on his feet. She is averaging only 0.34 successful takedowns every 15 minutes. Casey doesn’t try submissions a lot, but she is usually successful when it happens. In two of his last four wins, Casey has won by an armbar. In this fight Casey needs to get out to a fast start and try to wear down Robertson early.

Gillian “The Savage” Robertson comes into this fight with a 7-4 record and in her last three fights she has won two fights. The one loss during that stretch though was in her last fight in October of 2019.In the last fight against Maycee Barber she was dominated. She was outstruck 34-12 and knocked out three minutes in the first round.

Are we really sold on Robertson after the last fight that she lost? Casey is going to neutralize Robertson’s takedowns and that will be the difference. Look for Casey to win this game at plus money.