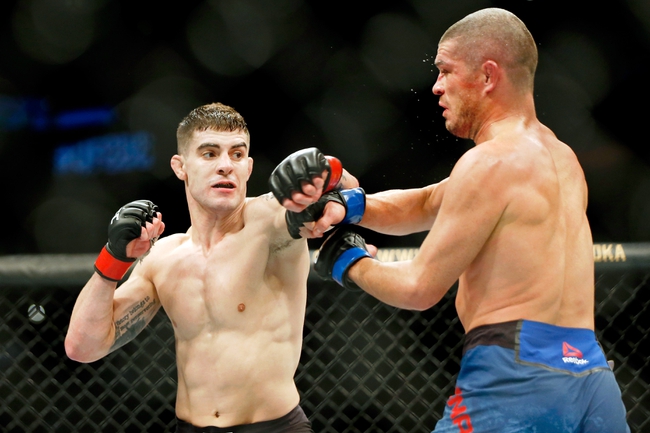 Austin Hubbard and Joe Solecki faceoff in a lightweight bout at UFC Fight Night 173 at the UFC Apex in Las Vegas. Like the last few events, there will be no fans in the stands for this one. These are both fighters who are currently unranked.

Austin “Thud” Hubbard comes into this fight with an 11-4 record overall but since entering he has a 1-2 record. Each of his three fights since coming into the UFC has gone to a decision. In his last fight in early March of 2020 against Mark Madsen he really struggled. Hubbard was taken down eight times in that fight and was outstruck 41-15 and that led to a unanimous decision loss.

Hubbard is averaging 3,02 significant strikes per minute while giving up 2.71 significant strikes per minute. Hubbard is also averaging one takedown every 15 minutes, but against the takedown he does struggle, stopping only 45 percent of the attempts. In this fight, Hubbard needs to be the one doing the taking down and not being the one getting taken down.

Joe Solecki comes into this fight with a 9-2 record and in his first start in the UFC he came away with a big victory. Solecki’s last fight came in December of 2019 against Matt Wiman. In that fight Solecki outstruck Wiman 56-10 and he also had four takedowns in the fight. Solecki likes to get the fight on the ground, and in this fight he is going to try and get that done.

Solecki is a pretty heavy favorite in this fight, and for good reason. Solecki is really good at takedowns, and Hubbard struggles at that. Look for Solecki to get the fight to the ground and that will be the difference. He might not get the finish, but he is going to do enough to win a decision. If you are comfortable laying this number, this is a very strong play.