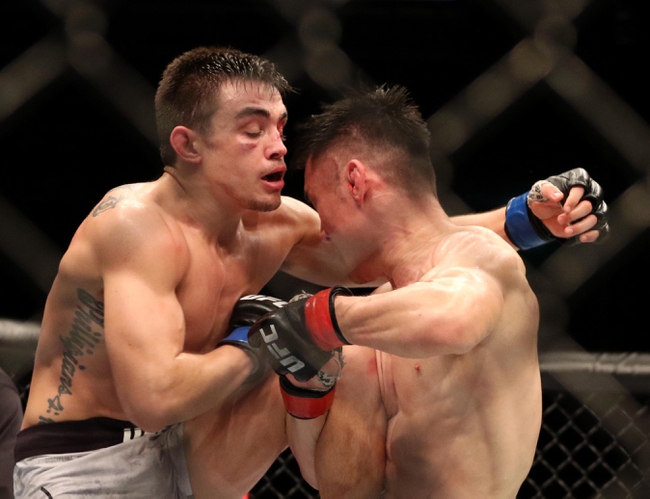 Ryan Benoit and Tyson Nam face off in a flyweight bout at UFC Fight Night 172 at the UFC APEX in Las Vegas. Like the last few events, there will be no fans in attendance for this fight.Both of these fighters are currently unranked.

Ryan “Baby Face” Benoit comes into this game with a 10-6 game overall, but since coming into the UFC he has gone 3-3-. Benoit’s last fight came against Heili Alateng and he actually outstruck him, 68-47, but he was taken down four times, and that led to a split decision loss. Benoit is averaging 2.80 significant strikes per minute while absorbing 3.18 significant strikes per minute. Not often does Benoit look to get the fight to the ground, having a successful one only 0.20 takedowns every 15 minutes. “Baby Face” also only averages 0.2 submission attempts every 15 minutes. Benoit is an aggressive fighter who will try to use his punches and leg kicks to get the job finished early.

Tyson Nam overall has an 18-11-1 record overall, but since coming into the UFC he has had some real struggles,and if he doesn’t win this fight, he might lose his spot on the roster. Nam has fought twice since getting into the UFC and he has lost each of the last two fights. Nam’s last fight came on February 22nd and he wasn’t impressive at all. Nam was outstruck 78-50 and that led to the loss. Nam is averaging 3.00 significant strikes per minute while absorbing 5.80 significant strikes per minute. Nam hasn’t tried any takedowns or submissions since coming into the UFC. Nam wants to keep the fight on the feet and his power and leg kicks. In this fight Nam needs to wear down Benoit early with the leg kicks if he wants any shot.

Nam hasn’t shown anything in his first couple of fights in the UFC to prove that he deserves to be bet on this one. Look for Benoit to avoid the leg kicks and that will be the difference. It might go to a decision, but Nam will come away with a victory.