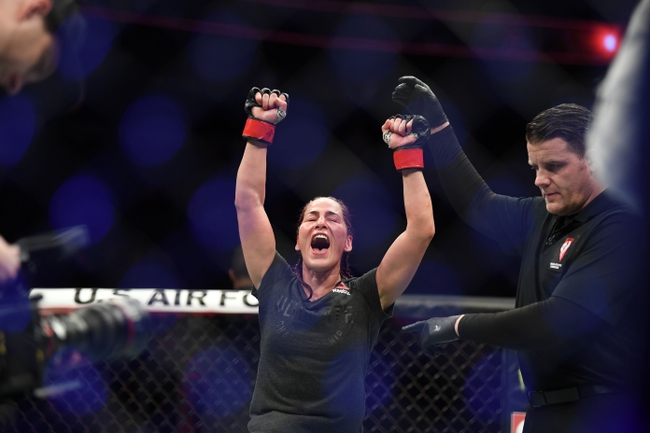 Jessica Eye and Cynthia Calvillo face off in a woman’s flyweight bout for the main event of UFC Fight Night 172 at the UFC APEX in Las Vegas. Like the last few events, there will be no fans in attendance for this fight. Eye is the number one ranked contender in the flyweight division, while Calvillo is ranked 10th.

Jessica “Evil” Eye has really turned a corner as of late, winning four of her last five fights with the only loss coming against Valentina Shevchenko two fights ago with a championship on the line. She did it back around though in her last fight in December of 2019. Eye went to a decision against Viviane Araujo but she won by unanimous decisions. Overall Eye has a 15-7 record.in the MMA.

Cynthia Calvillo comes into this fight with an 8-1-1 record but her last fight in December was a loss. Calvillo lost to Marina Rodriguez by majority decision. Cavillo outstruck Rodriguez and had three takedowns but that still wasn’t enough in the judge’s eyes.

Jessica Eye stops 59 percent takedown attempts and that is going to be the difference. Calvillo is going to try and get the fight to the ground, but it won’t work. Eye is going to battle and keep control of the fight, which will be enough for her to come away with a victory. Look for this fight to go the distance.