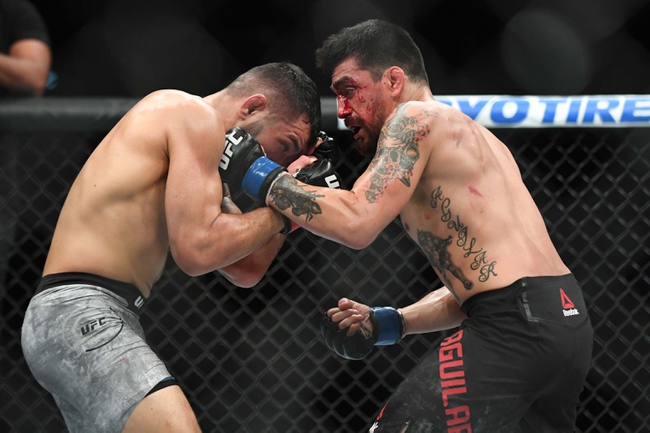 Charles Rosa and. Kevin Aguilar face off in a lightweight bout at UFC Fight Night 172 at the UFC APEX in Las Vegas. Like the last few events, there will be no fans in attendance for this fight. This is the last fight of the prelims. These are two fighters who are both unranked in the lightweight division.

Rosa has power in his hands, but he also has a lot of success with his legs kick, something he should try to do early in this fight.

Kevin Aguilar overall has a 17-3 record, but he comes into this fight having lost two fights in a row. In Aguilar’s last fight against Zubaira Tukhugov he had no answers in the first couple of minutes which led to a knockout during the third minute of the first round. Aguilar is averaging 3.73 significant strikes per minute while absorbing 4.44 significant strikes per minute. Aguilar is most comfortable on the feet, something that he is going to need to try and do in this fight. Aguilar is stopping 86 percent of takedown attempts so far in his UFC attempt.

In this fight if Aguilar wants to win, he needs to do everything in his power to keep the fight on the feet.

Aguilar is elite stopping the takedown and that is going to be the difference in this fight. He might not finish the fight but Aguilar is going to do enough to come away with a win in this one. I don’t love the price, but he is the right play in this fight.