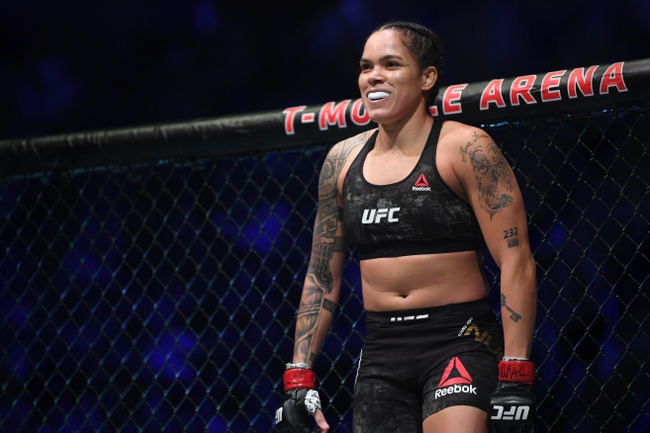 Amanda Nunes and Felicia Spencer face off in the women’s featherweight title bout at the UFC Apex in Las Vegas. There will be no fans in attendance for this fight.

Felicia Spencer comes into this fight with an 8-1 record overall and since entering the UFC she has a 2-1 record. Spencer’s last fight came on February 29th 2020 against Zarah Fairn. Spencer dominated the fight from the beginning throwing big haymakers early. Midway through the first round Spencer ended the fight by TKO.

The only loss by Spencer was two fights ago when she was dominated by Cris Cyborg. In that fight Spencer was outstruck 122-38 on the way to a loss.

Spencer likes to get the fight to the canvas where she has proven to have elite ground and pound. Spencer is averaging 4.54 significant strikes per minute and 1.36 successful takedowns every 15 minutes. Spencer also averages 0.7 submission attempts per minute. In this fight Spencer needs to try and get it to the ground or she could be in some trouble.

Amanda Nunes isn’t just the greatest female fighter ever, she is one of the greatest fighters ever in the UFC. Nunes comes into this fight with a 19-4 record overall and she has won the last ten fights overall. Each of the last seven wins for Nunes have resulted in her winning a belt.

Nunes last fight came against Germaine de Randamie in December of 2019. In that fight, it went to a decision which is a bit odd for Nunes, but there really was no doubt that Nunes was coming away with a victory.

Nunes is averaging 4.34 significant strikes per minute while absorbing only 2.63 significant strikes per minute. Nunes also does a good job of getting the fight to the mat if she wants to, averaging 2.33 successful takedowns per 15 minutes. The best part of Nunes fighting is how balanced she is. There really isn’t any part of fighting she struggles with.

Nunes is a big favorite, and for good reason, there is no chance that she is losing this fight. Look for Nunes to dominate the fight early and to get a little extra value take her to win this fight by finish.

Get Premium Picks Start Winning Now »
The pick in this article is the opinion of the writer, not a PickDawgz site consensus.
Previous Pick
Raphael Assuncao vs. Cody Garbrandt - 6/6/20 UFC 250 Pick and Prediction
Next Pick
Jordan Griffin vs. Darrick Minner - 6/13/20 UFC Fight Night 172 Pick and Prediction