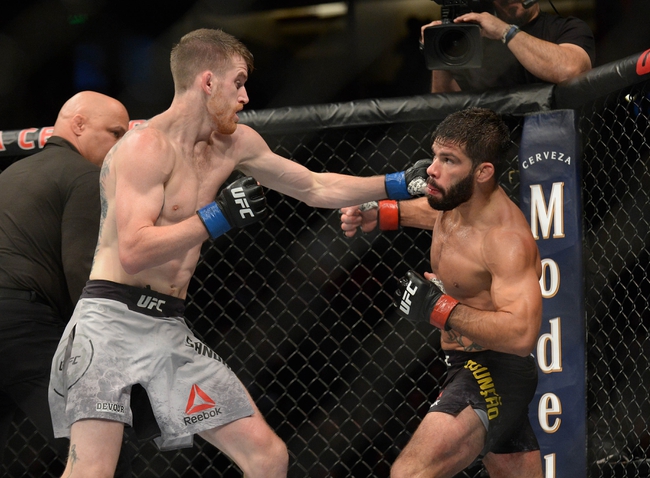 Aljamain Sterling and Cory Sandhagen face off in a bantamweight bout at the UFC Apex in Las Vegas. There will be no fans in attendance for this fight.Sterling is currently ranked second in the class while Sandhagen is ranked fourth.

Aljamain “Funk Master” Sterling has won four fights in a row and overall he has an 18-3 record in the MMA. Each of Sterling’s last two fights went to the judges scoreboard, but he won both fights by unanimous decision. Sterling has had a bit of a layoff with his last fight coming against Pedro Munhoz in June of 2019. Sterling outstruck Munhoz 174-105 so there really wasn’t any doubt that he was going to come away with a win.

Corey Sandhagen might be asking for a title shot if he were to come away with a victory in this fight. Overall Sandhagen has a 12-1 record and since coming into the UFC he has gone 5-0. Sandhagen’s last fight was against Raphael Assuncao back in August of 2019. It went to the judges scorecard with Sandhagen coming out on top. Sandhagen is a power puncher who throws in a fury. He is averaging 7.14 significant strikes per minute while absorbing 4.16 strikes. Sandhagen is averaging 1.24 takedowns per 15 minutes.

Sandhagen is a well rounded fighter that makes his opponent be ready for everything. He is good with his kickboxing, in the clinch, and his elbows also can be a real issue.

If you like fast paced, exciting fights, this is going to be the one to keep a close eye on because if you blink, you might miss the finish. Sandhagen has more weapons and that is going to be the difference in this fight. Look for Sandhagen to finish the fight and cash your ticket.