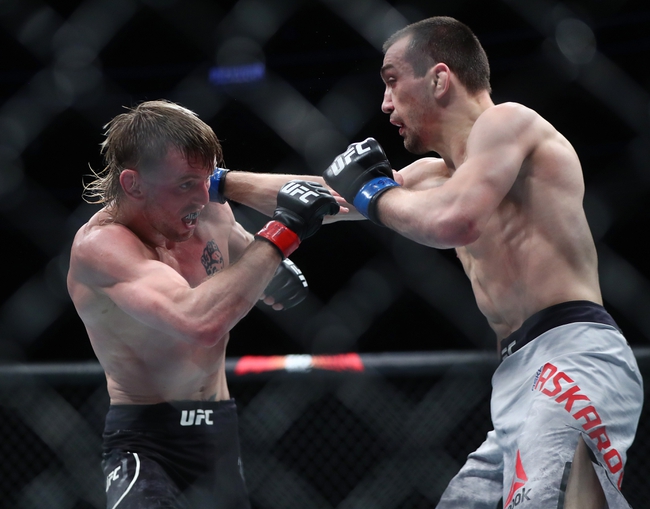 Tim Elliott vs. Brandon Royval face off in a flyweight showdown at UFC Fight Night 176. The fight will take place at the UFC Apex with no fans in attendance. Elliott is the number 11 ranked fighter in the division, while Royval is unranked.

Brandon “Raw Dog” Royval will be making his UFC debut when he steps into the octagon for this fight. Royval has a 10-4 record overall in the MMA and reigning Legacy Fighting Alliance champion.Royval’s last win came on November 22nd 2019 when he beat Nate Williams in Round 1 with an armbar.

Royval has power in his hands but when he is having most of his success he is looking for the submission. Each of Royval’s last two wins have been by armbar. Against a fighter like Elliott, getting the armbar might be tough, but there is no doubt that’s what he will be going for.

Tim Elliott will be welcoming Royval into the octagon and he is hoping that he can ruin the newcomers' debut. Elliott comes into this fight with a 16-10-1 record in the octagon but has lost each of his last two fights. Elliott’s last fight came on January 18th 2020 against Askar Askarov. Elliott had three takedowns in that fight, but Askarov had more strikes, and that was the difference as he lost a unanimous decision. Elliott is one of the more interesting fighters in the UFC because of how he fights. Elliott is always pressuring and always moving, which makes it even harder for opponents to take any type of rest.

Tim Elliott is the favorite in this fight and for good reason, he is the veteran that is hard for anyone, especially someone making their UFC debut. Elliott will use his relentless style to wear down Royval and that will be enough to come away with a victory.