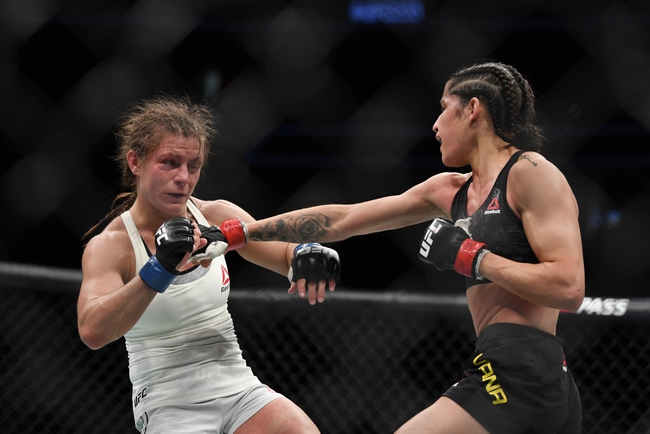 Mackenzie Dern and Hannah Cifers face off in a women’s strawweight showdown at UFC Fight Night 176. The fight will take place at the UFC Apex with no fans in attendance. Both of these guys are unranked in the division.

Mackenzie Dern is an interesting case study, because of how she looked in her last fight. Dern was 7-0 after May 12th 2018 battle against Amanda Cooper. After that fight she got pregnant, and she had a long layoff. After looking so dominating. Dern looked the opposite of that coming back from her long layoff. On October 12th, 2019 Dern faced off with Amanda Ribas and it was ugly. Dern was outstruck 74-20 and that lost her a unanimous decision. The big question heading into this fight is which fighter will show up, the one from her first seven fights, or the one in her last one.

Hannah “Shockwave” Cifers comes into this game with a 10-4 record and since coming to the UFC she has a 2-2 record. Cifers last fight came on January 25th 2020 against Angela Hill. Cifers really struggled in that fight and Hill ended it in the second with Elbows.

Cifers is averaging 4.82 significant strikes per minute while absorbing 5.55 significant strikes per minute. Cifers doesn’t often try to take a fight to the ground, and even less does she go to try and get a submission attempt. Look for Cifers to stand in the middle of the octagon and try to throw power punches. If this fight gets to the ground, there could be some major issues.

Dern is the big favorite in this fight, but she is going to have some issues getting it done. She struggled in her first fight, and it will happen again. Look for Cifers to land some big punches and wear Dern down to get the victory. There is too much value at this price.