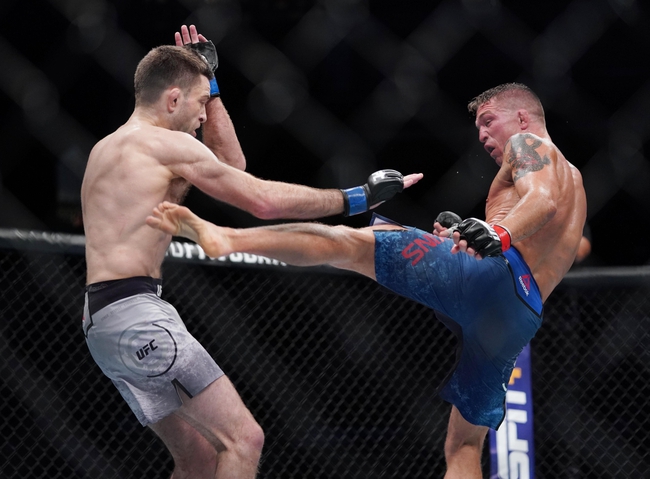 Darren Elkins and Nate Landwehr face off in a featherweight showdown at UFC on ESPN 10. The fight will take place at VyStar Veterans Memorial Arena with no fans in attendance.Both of these guys are both currently unranked in the featherweight division.

Darren “The Damage” Elkins is a UFC veteran but he comes into this fight struggling. Overall Elkins has a 25-8 record but he has lost three straight fights. Elkins last fight was against Ryan Hall and he didn’t look very good. Elkins made it the distance in the fight in July of 2019 but he lost by a unanimous decision.

Elkins likes to get the fight to the ground averaging 2,52 successful takedowns per 15 minutes, and also tries 1.3 submissions per 15 minutes. Elkins averages 3.27 significant strikes per minute, while absorbing 2.80 significant strikes per minute. Elkins last win came in 2018 by rear-naked choke. In this fight look for Elkins to get the fight to the ground and try to finish it with that rear-naked choke. Elkins birthday is on Saturday, so a win in this fight would be extra special.

Nate “The Train” Landwehr comes into this fight with a 13-3 record and this will be his second fight in the UFC. Landwehr hadn’t lost since 2015 heading into his last fight in January against Herbert Burns. Midway through the first round, Landwehr took a knee that ended the fight. In that fight, Landwehr was averaging only 1.47 significant strikes per minute, and he needs to do more than that to win this fight. Landwehr wants to make a run in the UFC, but if he were to lose this game, that would be devastating for his chances. There are only so many chances in the UFC, so a loss in this fight could be his last one.

Elkins is more experienced and Landwehr didn’t land enough significant strikes in the first fight in the UFC to keep this one close. Look for Elkins to control the fight from the start and get it to the ground. He might not finish the fight, but Elkins will win this one by decision.