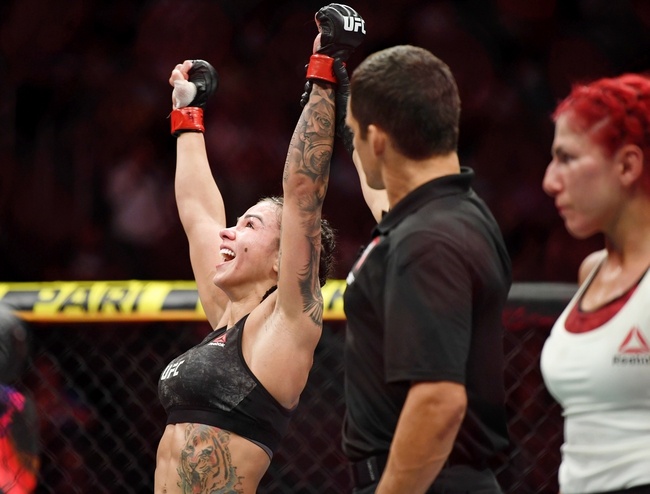 Claudia Gadelha and Angela Hill will face off in a women's strawweight showdown at UFC on ESPN 10. The fight will take place at VyStar Veterans Memorial Arena with no fans in attendance. Gadelha is the number 6th ranked fighter in the division while Hill is unranked but would no doubt shoot up the rankings with a win in this fight.

Angela Hill overall has a 12-7 record, but she seems to be getting hot at the right time. Hill has won three fights in a row and two of those three were finished with elbows. Hill’s last fight came on February 22nd when she won a unanimous decision over Loma Lookboonmee. Hill loves to throw punches and is averaging 5.74 significant strikes per minute, while absorbing 5.13 significant strikes per minute. Hill is averaging only 0.5 successful takedowns per 15 minutes, and she only attempts 0.2 submissions per fight.

Claudia Gadelha comes into this fight with a 17-4 record overall and a win in her last fight. Gadelha’s last fight came against Randa Markos in July of 2019 and it was a unanimous decision win. Gadelha’s first goal in every fight is to get it to the ground and she is usually a problem when she gets that done. Gadelha is averaging 3.34 successful takedowns a fight and she is successful on 47 percent of her attempts.

One issue with Gadelha’s fight game is at times, she takes too much damage. Opponents average 4.38 significant strikes per minute Gadelha is also averaging 0.8 submission attempts per 15 minutes. In this fight for Gadelha to win this fight she needs to get it to the ground and try to take control of the fight.

Hill is a power striker that will try to hunt the early knockout, but she isn’t going to find a lot of success. Gadelha is going to get this fight to the ground, and that will be the difference. That is going to be the difference, with Gadelha winning by unanimous decision. 30-27 will be on all three judges scorecards.