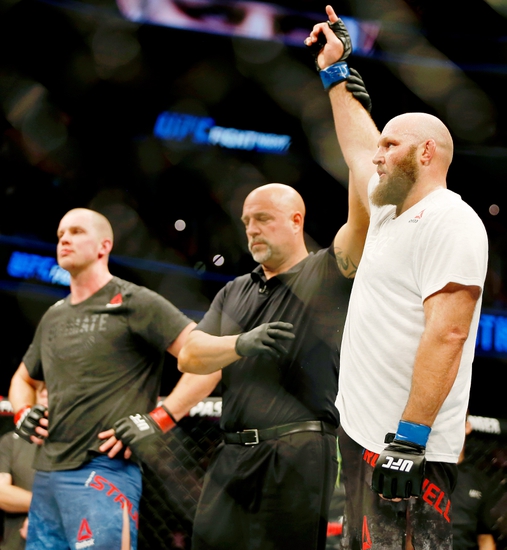 Ben Rothwell and Ovince Saint Preux face off in a heavyweight battle at UFC Fight Night 171. The fight will take place at VyStar Veterans Memorial Arena with no fans in attendance.

Ovince Saint Preux comes into this fight with a 24-13 record, and in his last fight be beat Michal Oleksiejczuk in the second round with a choike. Before tat fight, Saint Preux had lost two fights in a row so that was a critical win for a fighter who desperately needed a win. Over Saint Preux’s last eight fights he has five wins, so even though there has been some struggles as of late, he is still a good fighter.and a win in this one would go a long ways.

Ben Rothwell is coming off a win, but before that he had lost three straight fits. Back in 2017, so he only has only fought three times since April of 2016. In Rothwell’s last fight it was a pretty even fight against Stefan Struve until he had a couple of big punches that ended it in the second round.

Saint Preux is moving up from light heavyweight to heavyweight and I think that jump up is going to hurt him. Look for Rothwell to use his extra weight and that will be the difference. Back Rothwell to get the job done at the plus money.