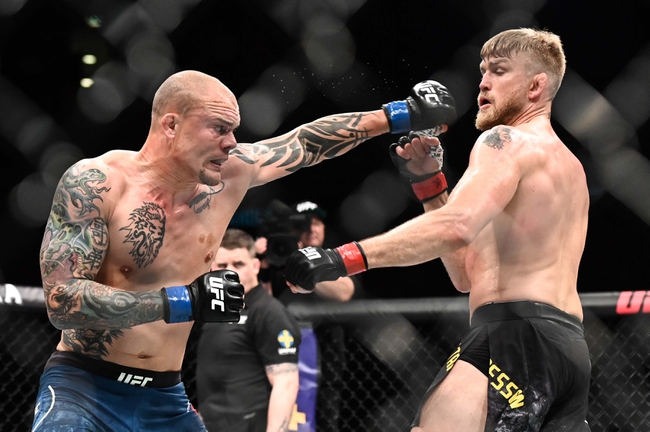 Anthony Smith and Glover Teixeira face off in a light heavyweight battle for the main event of UFC Fight Night 171. The fight will take place at VyStar Veterans Memorial Arena with no fans in attendance.

Anthony “Lionheart” Smith comes into this fight with a 32-14 record and had a win in his last fight. After losing to Jon Jones with a championship belt on the line, Smith got back on the right track in his last fight. It was a rear naked choke by Smith that finished the job against Alexander Gustafson. Over the last five fights, Smith has four wins and two of those were by rear naked choke.

Glover Teixeria overall has a 30-7 record and has won three fights in a row coming into this one. His last fight came against Nikita Krylov in September of 2019. Teixeira fought a pretty even fight with Krylov but he was able to come away with the split decision victory.

Teixeria is a guy who is comfortable being on his feet and also taking it to the ground. Coming into this fight Teixeria is averaging 3.41 significant strikes per minute while absorbing 3.84 per minute.

Teixeria is averaging two takedown attempts per 15 minutes and also tries one submission attempt a fight.

These are two fighters who aren’t afraid to stand in the middle of the octagon and trade blows back and forth. These are both seasoned fighters in the UFC, but Teixeria is older by nine years and that extra age is going to hurt him in this fight. Look for Smith to get one of his big power punches to land it’s going to put Teixeria on his back.

Smith is going to win this fight, and try to make another run at the belt.

Get Premium Picks Start Winning Now »
The pick in this article is the opinion of the writer, not a PickDawgz site consensus.
Previous Pick
Ben Rothwell vs. Ovince Saint Preux 5/13/20 UFC Fight Night 171 Picks and Prediction
Next Pick
Rodrigo Nascimento Ferreira vs. Don’tale Mayes 5/16/20 UFC on ESPN 10 Pick and Prediction