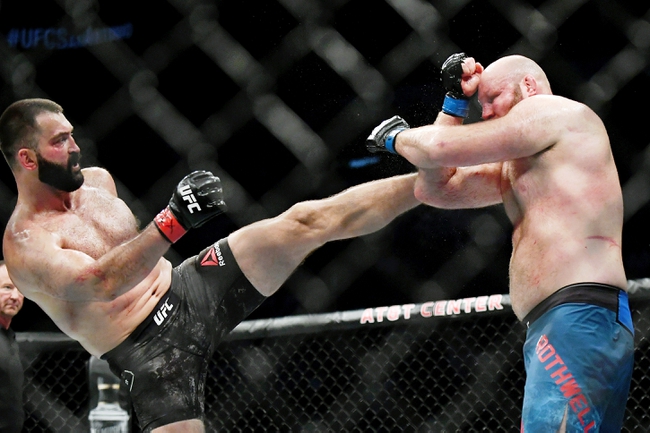 Andrei Arlovski and Philipe Lins face off in a heavyweight showdown UFC Fight Night 171. The fight will take place at VyStar Veterans Memorial Arena with no fans in attendance.Both of these fighters are unranked.

Andrei “The Pitbull” Arlovski has had a lot of success in the UFC but as of late there have been some struggles. Arlovski lost his last fight and four of his previous five appearances inside the cage. In his last fight against Jairzinho Rozenstruik he came out swinging but he was caught early with a punch and that ended his night after just 29 seconds.

Lins will be making his UFC debut in this fight, but that doesn’t mean he is any stranger to the octagon. Coming into this fight he has a 14-3 pro MMA record including wins in each of his last three fights. For Lins he has had a long layoff with his last fight coming the last day of 2018.

In the last fight against Josh Copeland it took until the 4th round until he was able to finish the fight with his knees. Lins is known for knockout power with his hands, but he also has strong leg kicks that could finish the job. Look for Lins to try and show off his power early on and try to look for the knockout early.

Lins is being hyped up coming into this fight, and for good reason, he could make a run up the rankings. His power is going to be too much for Arlovski and he will get the job done early. Back Lins to cash in this fight. This is going to be the first of many wins for Lins inside the UFC.

Get Premium Picks Start Winning Now »
The pick in this article is the opinion of the writer, not a PickDawgz site consensus.
Previous Pick
Tony Ferguson vs. Justin Gaethje 5/9/20 UFC 249 Picks and Prediction
Next Pick
Alexander Hernandez vs. Drew Dober - 5/13/20 UFC Fight Night 171 Picks and Prediction