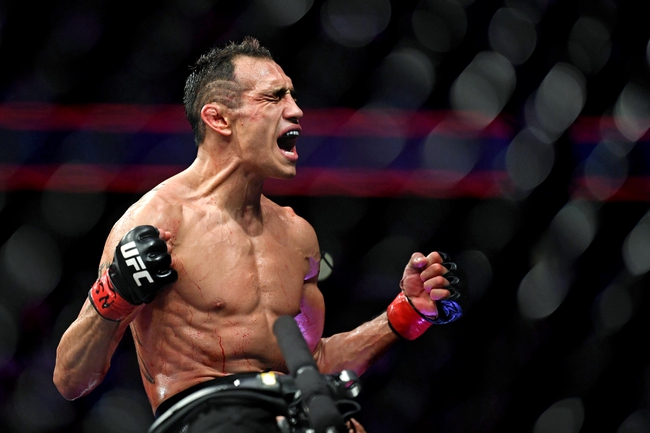 The UFC is finally back with UFC 249 set for Saturday, May 9th in Jacksonville, and the main event should be a good one with Tony Ferguson and Justin Gaethje going head to head. Ferguson was supposed to be fighting Khabib Nurmagomedov for the lightweight title. With Nurmagomedov suck in Russa because of COVD-19 it will be Ferguson and Gaethje for the interim title.

Justin Gaethje is one of the best fighters in the UFC and if he can win this fight, he would really open up a lot of eyes. He comes into this fight with a 21-2 record and he is a knockout artist. Gaethje has won each of his last three fights by knockout. The last fight over Donald Cerrone was a dominant one. Gaethje outstruck, Cerrone 40-17, and was able to knock him out in the last minute of the first round.

As strong as Gaethje has been, at times he also can get in trouble and knocked out. Against Dustin Poirier four fights ago he was worn down and in the fourth round, he was knocked out. Gaethje was also knocked out by Eddie Alvarez in the fight before Poirier. In that fight, it was a knee by Alvarez that ended it.

Gaethje is a guy who wants to keep it on his feet and won’t try to get the fight on the ground. Gaethje also is decent at fending off his opponent, stopping takedowns at an 80 percent rate.

It will be interesting to see how Ferguson how reacts to this fight after not getting a chance at Khabib again. Ferguson comes into this one with a 26-3 record and has won 12 fights in a row. Each of the last two wins for Ferguson has been by knockout, but he also will work for a submission if a fight dictates he moves in that way.

Ferugson’s last win was on June 8th, 2019 against Cowboy Cerrone. Ferguson landed 104 strikes and dominated one of the more durable fighters in the UFC. Ferguson isn’t a guy who will go the ground a lot, averaging only 0.56 per 15-minute fight.

Ferguson made a point to get down to wait for the fight he was supposed to have against Khabib and that is going to hurt him in this fight. Gaethje has the power to stand up against anyone and he will do it in this one. Look for this fight to go the distance, and Gaethje to win it on the scorecards.

Get Premium Picks Start Winning Now »
The pick in this article is the opinion of the writer, not a PickDawgz site consensus.
Previous Pick
Henry Cejudo vs. Dominick Cruz 5/9/20 UFC 249 Picks and Prediction
Next Pick
Andrei Arlovski vs. Philipe Lins 5/13/20 UFC Fight Night 171 Picks and Prediction