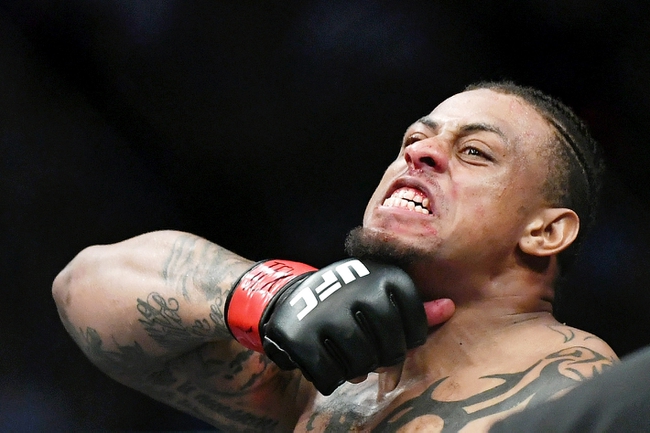 Greg Hardy and Yorgan De Castro face off in a heavyweight showdown at UFC 249 at VyStar Veterans Memorial Arena. This is an unranked matchup, but one of the more anticipated fights on the card.

Greg Hardy comes into this game having five wins, two losses, and one no contest. Greg Hardy has had some issues during his UFC career dealing with not knowing the rules. Hardy was handed some cupcakes early in his career, but he really met his match in his last fight. In a step up in competition, Hardy was dominated for three rounds against Alexander Volkov. All five wins for Hardy have come by knockout, but when he can’t get the early knockout he does tend to struggle.

Hardy is averaging 4.77 significant strikes landed per minute while hitting with 49 percent accuracy. This is a big fight for Hardy as he tries to prove that he can win a fight even if he can’t get the knockout early.

Yorgan De Castro comes into this fight with a perfect 6-0 record and everyone has been finished by knockout. His last fight came in October of 2019 against Justin Tafa and it was finished in the middle of the first round. In the last fight, De Castro only needed four significant strikes to land to finish off the job.

This is going to be a tougher fight for De Castro and he is going to need to be able to not get knocked out early. If De Castro can last a couple of minutes he is going to be in good shape to come away with the victory. De Castro also knows that he has the knockout power to finish this one early so look for him to throw haymakers early.

These are two fights who are going to look for the finish early, and one of them is going to get it. This is a big step up in competition for De Castro, and Hardy is going to have to problem getting the job done. Look for Hardy to land one of those big punches and knock De Castro out.