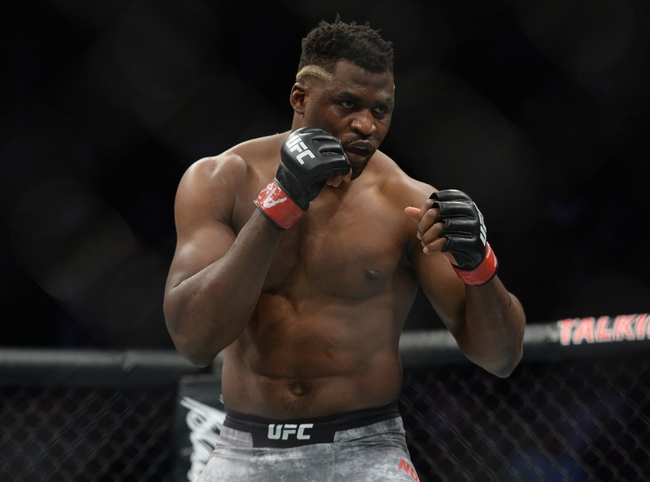 Francis Ngannou and Jairzinho Rozenstruik face off in a heavyweight bout. Ngannou is ranked number two in the class while Rozenstruik is ranked sixth, Could the winner be in line for a title shot?

Ngannou comes into this fight with a 14-3 and has won three fights in a row. Before that three-fight winning streak, Ngannou had lost two fights in a row by unanimous decision. Ngannou has ridiculous power in his hands and has proven it in each of the last three fights. Each of those fights have come by way of knockout and each have been in the first 1:20 of the first round.

Ngannou is a fighter who wants to keep it on the feet, and it should be no different in this fight. Ngannou has never had a takedown in his MMA career. Ngannou is also pretty solid at takedown defense giving it up only 71 percent of the time. Ngannou isn’t great on the ground when he gets taken down, and it’s the last thing he will want to happen in this fight.

Jairzinho Rozenstruik comes into this fight with a 10-0 record and is 4-0 during his fights inside the UFC. All four of his fights in the UFC have been finished by knockout. Three of the fights for Rozenstruik have been with punches, and the other was a kick.

Ngannou deserves that title shot and he is going to prove why with a dominating effort in this fight. Rozenstruik really hasn’t beaten anyone and it’s going to show in this fight. Look for Ngannou to go head-hunting early, and it won’t last that look. Ngannou is going to win this fight by knockout early by the end of the first round.