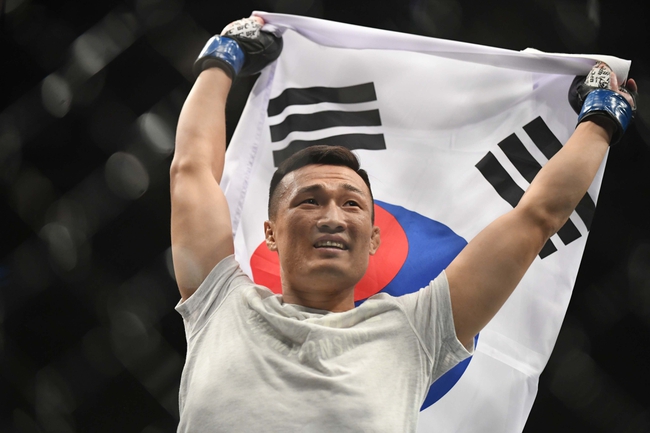 Frankie Edgar enters this fight with a 22-7-1 record and has won 55 percent of his fights by decision. Edgar has split his last six fights and is coming off an July loss to Max Holloway. Edgar is averaging 3.6 significant strikes per minute with an accuracy percentage of 39 percent. Edgar is averaging 2.36 takedowns with an accuracy percentage of 31 percent. Edgar held his own for five rounds, landing 96 total strikes at 36 percent and producing the only takedown of the fight. While it didn’t earn the victory, it was a promising performance from somebody who was out of the octagon for more than a year. Edgar is an aggressive takedown artist with a polished grappling attack and is well conditioned enough to outlast most opponents. Edgar is tough as nails and is the sort of fighter who will continue to stand in there even if his opponent is getting the best of him. Edgar has only been finished once in seven career losses, which was that knockout punch from Brian Ortega back in early 2018. A high volume fighter with a background in boxing, wrestling and Brazilian jiu-jitsu, Edgar is old school and is still willing to compete even though he’s been in some wars and is now 38 years old. This will be Edgar’s first career fight in South Korea.

Chan Sung Jung enters this fight with a 15-5 record and has won 53 percent of his fights by submission. Jung has won five of his last eight fights and is coming off a June win over Renato Moicano. Jung is averaging 4.25 significant strikes per minute with an accuracy percentage of 39 percent. Jung is averaging 0.81 takedowns with an accuracy percentage of 41 percent. Jung bounced back nicely from his heartbreaking loss to Yair Rodriguez with a performance of the night knockout at UFC Fight Night 154. Jung has earned bonuses in six of his last seven fights and now looks to win back-to-back fights for the first time since 2011-12. Jung has shown that the ability is still there and you can put to bed any questions about the ridiculously long layoff, as he should be 3-0 since his return. Jung is still the creative striker standing up with a deep background in kickboxing, and he’s highly polished on the ground with a black belt in Judo. A real grinder in this sport, Jung has knockout striking power and has never been finished on the canvas throughout his career. This will be Jung’s seventh career fight in South Korea, his birthplace.

Edgar has the toughness and the hand speed to get the job done here and his performance against Holloway was promising despite the loss. You can make a case for Edgar in the underdog role. However, Sung Jung has been kind to us in the past and would be riding a three-fight winning streak if it wasn’t for a last-second bizarre knockout loss. Sung Jung has shown crisp boxing, has defended takedowns well and looks like a fighter who is on a mission after so many years out of the sport. We also can’t ignore that this will be Sung Jung’s first fight in South Korea in over a decade and you know he’ll be motivated to put on a show for his people. Betting against Sung Jung in this spot isn’t an option for me.