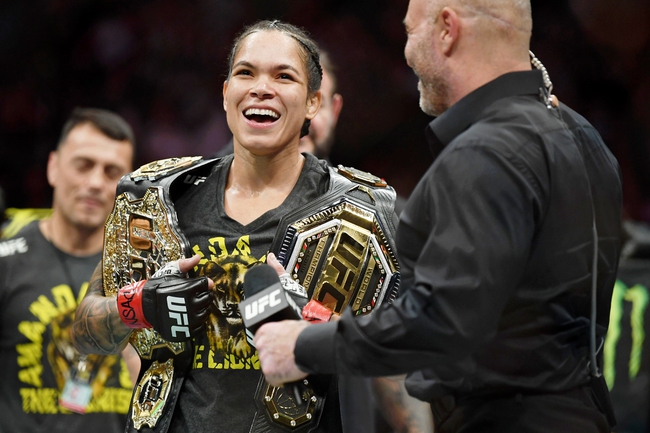 Amanda Nunes enters this fight with a 18-4 record and has won 72 percent of her fights by knockout. Nunes has won her last nine fights and is coming off a July win over Holly Holm. Nunes is averaging 4.62 significant strikes per minute with an accuracy percentage of 51 percent. Nunes is averaging 1.76 takedowns with an accuracy percentage of 40 percent. Nunes easily defended her UFC Women's Featherweight Championship in a first round knockout, becoming the first fighter to knockout Holms. Nunes is probably safe in the top spot for the pound for pound on the women’s side given this recent stretch she’s been on the last couple of years. Nunes is an accurate striker who cuts off the octagon and can land bombs when she has her opponent on her heels. Nunes is also a black belt in Brazilian jiu-jitsu and is effective when she looks for takedowns. Nunes has produced finishes in seven of her last nine fights and six of those wins have come in the first round. At just 31 years old, Nunes has this sport in a chokehold as long as she wants. This will be Nunes’ sixth career fight in Las Vegas.

Germaine de Randamie enters this fight with a 9-3 record and has won 56 percent of her fights by decision. de Randamie has won her last five fights and is coming off a July win over Aspen Ladd. de Randamie is averaging 3.15 significant strikes per minute with an accuracy percentage of 48 percent. de Randamie is averaging zero takedowns with an accuracy percentage of zero percent. de Randamie is coming off an impressive performance, as she landed a clean shot early in the first round and the referee stopped it, creating a controversial stoppage. It was the third finish for de Randamie during this five-fight winning streak. de Randamie is a standup striker who has a deep background in kickboxing and boxing, and she’s more than willing to trade in the octagon if needed. de Randamie has good footwork and is a rangy fighter who can get in and out nicely and tag from a distance, which she showed in her last bout. de Randamie doesn’t have much ground success on the UFC level in terms of numbers, but she has shown quality wrestling in the past and can survive the canvas if forced to. This will be de Randamie’s first career fight in Las Vegas.

These two fought back in November of 2013 at UFC Fight Night 31, and Nunes won in a first round knockout via elbows. de Randamie has padded her resume since then with some impressive wins, but she’s only fought five times and this will be the first time in six years she’s fought twice in the calendar year. de Randamie is a tough matchup for anybody given her length and the power she has in those hands, but it’s nothing Nunes hasn’t seen, and it’s the Brazilian who is the more balanced fighter between the two. It’s fair to say Nunes is better than she was in the last fight, and I’m not sure we can say the same about de Randamie.

Give me Nunes in a finish.