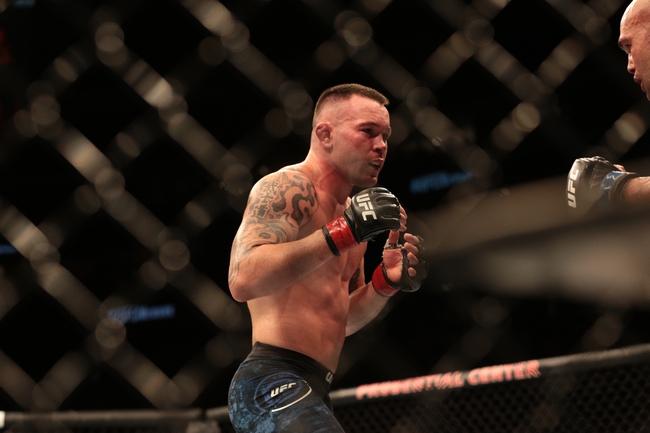 Colby Covington and Kamaru Usman fight Saturday in UFC 245 at the T-Mobile Arena.

Colby Covington enters this fight with a 15-1 record and has won 53 percent of his fights by decision. Covington has won each of his last seven fights and is coming off a August win over Robbie Lawler. Covington is averaging 3.9 significant strikes per minute with an accuracy percentage of 37 percent. Covington is averaging 5.69 takedowns with an accuracy percentage of 51 percent. Covington looked good for a fighter who was out of the octagon for more than a year, as he landed countless strikes, threw in a few takedowns and was dominant for five rounds. All five of Covington’s last five fights have gone the distance, and he’s shown in back-to-back fights that five rounds don’t bother his gas tank one bit. Covington is most known for his wrestling and cardio, as he’s just as effective in the first round as he is the fifth round, and he is highly effective with his takedowns and never stops being aggressive, which is why he’s won all eight of his career decisions. And while it’s his ground game that gets all of the attention, Covington can hold his own with his standup striking, as his crazy arm angles can be tough to read and it often leads to him following in with a takedown attempt. Covington has proven to be the real deal and is worthy of the title shot. This will be Covington’s fourth career fight in Las Vegas.

Kamaru Usman enters this fight with a 15-1 record and has won 53 percent of his fights by decision. Usman has won his last 14 fights and is coming off a March win over Tyron Woodley. Usman is averaging 4.2 significant strikes per minute with an accuracy percentage of 54 percent. Usman is averaging 3.96 takedowns with an accuracy percentage of 50 percent. Usman has seen his last four fights go the distance, and he absolutely dominated Woodley to win the UFC Welterweight Championship, as he took him down relentlessly and controlled all five rounds effortlessly. Usman is often considered a boring fighter who lacks a killer instinct, but his style is effective and we haven’t seen any recent opponents hold their own with him on the canvas. Usman is a takedown machine with a deep wrestling background and a quality ground and pound attack. Usman is a really gifted athlete who usually gets the fight where he wants it and can spend majority of the fight from the top position where he simply wears on his opponents. It may not always be sexy for the viewing audience, but there’s no denying Usman is a more than worthy champion. This will be Usman’s fourth career fight in Las Vegas.

Usman is a deserving favorite because of what he did to Woodley, but the problem is he has never seen a fighter like Covington in the past. While he may have success with his takedowns, Usman won’t be able to hold down Covington like he does other opponents and he’s sure to tire out eventually. We have not seen Covington get tired yet and that’s scary in a fight that could be a grappling / wrestling contest. If this fight ends up on the feet, Covington has the clear edge with a little more pop in his hands and sharper boxing. The constant pressure of Covington and the ability to get up and frustrate Usman makes him a live underdog here.

Covington and the plus money has to be one of the better UFC bets in a while.