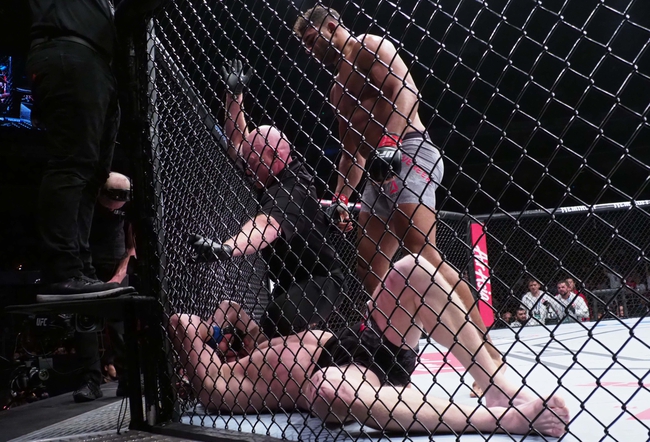 Alistair Overeem and Jairzinho Rozenstruik fight Saturday during UFC on ESPN 7 at the Capital One Arena.

Alistair Overeem enters this fight with a 45-17 record and has won 51 percent of his fights by knockout. Overeem has won seven of last 10 fights and is coming off an April win over Alexey Oleynik. Overeem is averaging 3.79 significant strikes per minute with an accuracy percentage of 73 percent. Overeem is averaging 0.48 takedowns with an accuracy percentage of 28 percent. Overeem is coming off his second straight first round knockout victory, and five of his last six wins overall have been knockouts. Right when you think Overeem is washed up as he approaches 40 years old, he gives us two straight impressive showings. Overeem is what he is, and that’s a ferocious stand up striker with powerful combinations in his hands and nasty knees in the clinch. With a deep kickboxing background, Overeem has some of the best leg kicks to the body and usage of his knees in the sport, and they’re capable of producing a knockout with one clean shot. Overeem is also a well polished grappler and has eight career victories via the guillotine choke. The downside will always be Overeem’s chin, as 13 of his 17 career losses have come by knockout. Win or lose, Overeem’s fights usually end in fireworks. This will be Overeem’s first career fight in Washington.

Jairzinho Rozenstruik enters this fight with a 9-0 record and has won 89 percent of his fights by knockout. This will be Rozenstruik’s fourth fight this year and he’s coming off a November win over Andrei Arlovski. Rozenstruik is averaging 3.22 significant strikes per minute with an accuracy percentage of 70 percent. Rozenstruik is averaging zero takedowns with an accuracy percentage of zero percent. Rozenstruik has put the heavyweight division on notice with back-to-back quick knockout victories, which includes his last bout that lasted 28 seconds. Rozenstruik landed a clean shot with his left hand that finished Arlovski, and we can’t forget his win over Allen Crowder that earned performance of the night honors at UFC Fight Night 154. Rozenstruik is an intriguing fighter at 31 years old who comes from a boxing and kickboxing background, and he has clear KO power in either hand. The concerns are that Rozenstruik still has limited experience against quality MMA fighters and has yet to show us he can hold his own on the ground. However, that standup striking is ready for the big leagues. This will be Rozenstruik’s third career fight in the United States.

This fight is as close to a tossup as it gets and it’s scary to see Overeem in the octagon with a powerful striker given his history and questionable chin. However, we have yet to see Rozenstruik against a fighter as experienced as Overeem, and we haven’t seen him dragged into the deep waters yet. Overeem should get Rozenstruik in the clinch and wear him down against the cage while exchanging hard knees to the body. I wouldn’t be shocked either way, but I do give Overeem the slight edge because of the experience. Rozenstruik is still green to the MMA side of things and has been way too comfortable in his handful of fights. Overeem is experienced enough to change that.