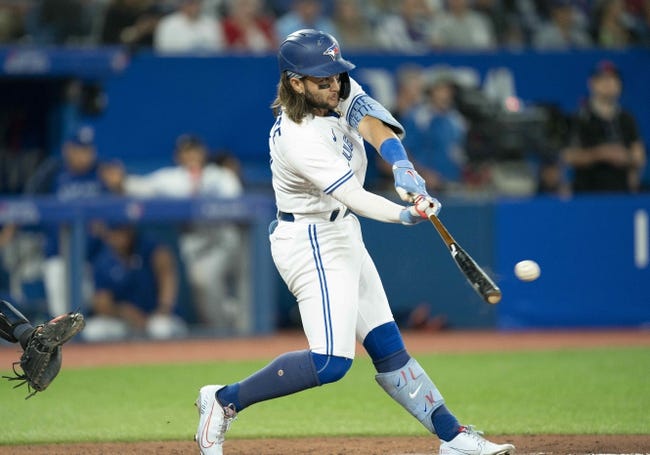 The Toronto Blue Jays will play the Philadelphia Phillies in Game 1 of their series at Citizens Bank Park on Tuesday night.

The Toronto Blue Jays are 83-64 this season and have won four of their last six games. Toronto is coming off of a series win against Baltimore, where they won two out of the three games played in the series. The Toronto pitching staff has a 3.88 ERA, a 1.23 WHIP, and a .247 opponent batting average this season. The Blue Jays offense has scored 686 runs with a .261 batting average and a .326 on base percentage. Bo Bichette is batting .283 with 24 home runs and 89 RBI’s for the Blue Jays this season. The projected starter for Toronto is Ross Stripling, who is 8-4 with a 2.94 ERA and a 0.99 WHIP over 119.1 innings pitched this season.

The Philadelphia Phillies are 80-66 this season and have lost four games in a row. Philadelphia is coming off of a series loss against Atlanta, where they lost all three games played. The Philadelphia pitching staff has a 3.91 ERA, a 1.24 WHIP, and a .242 opponent batting average. The Phillies offense has scored 679 runs with a .254 batting average and a .317 on base percentage this year. Kyle Schwarber is batting .213 with 39 home runs and 81 RBI’s for the Phillies this season. The projected starter for Philadelphia is Kyle Gibson, who is 10-6 with a 4.45 ERA and a 1.27 WHIP over 151.2 innings pitched this season.

Toronto comes into this series holding the first wild card spot in the AL, while Philadelphia has small lead for the last wild card spot in the NL. Toronto will start Ross Stripling, who has allowed six runs over his last 18.1 innings pitched. For the Phillies, Kyle Gibson has allowed 12 runs over his last 12.2 innings pitched. I am going with the over in this game.