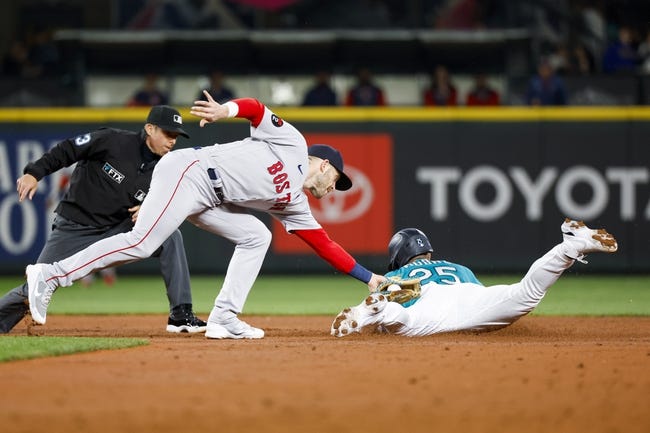 The Boston Red Sox and Seattle Mariners face off on Saturday in an MLB showdown at T-Mobile Park.

The Red Sox got out to a slow start to the season, but they have turned around their season and they look like a real playoff contender now. The Red Sox have leaned on the offense all season and they are averaging 4.69 runs per game which is 7th best in the MLB. The pitching is giving up 4.034 runs per game. Trevor Story also got out to a slow start, but he has turned it around now. Story has hit nine home runs and driven in 41 RBIs.

On the other side of this matchup is the Mariners who played a little better earlier in the season, but they have really fallen off, and heading into Friday’s game they had a 26-31 record. The Mariners offense hasn’t been great averaging 4.14 runs per game which is 21st in the MLB. Eugenio Suarez has been the best offensive player hitting 11 home runs and driven in 32 RBIs.

On the mound for the Red Sox is Michael Wacha who sits with a 4-1 record and an ERA of 1.99. In his last start against the Angels, he went all nine innings giving up only three hits and zero runs. His walks are up a bit this season, but he has worked around them.

On the mound for the Mariners is George Kirby who sits with 1-1 record and an ERA of 3.38. In his last start against the Rangers, he went six innings giving up five hits and two runs.

The Red Sox are 4-0 in Wacha’s last four road starts. The Mariners are 1-5 in their last six games played on Saturday. The under is 3-0-1 in the Red Sox's last four games as a road underdog.

Wacha has had a big season sitting with an ERA of 1.99 and in the last game he gave up zero runs. Look for the Mariners to really struggle to score here again against Wacha and this game will be over early. Back the Red Sox on the run line.