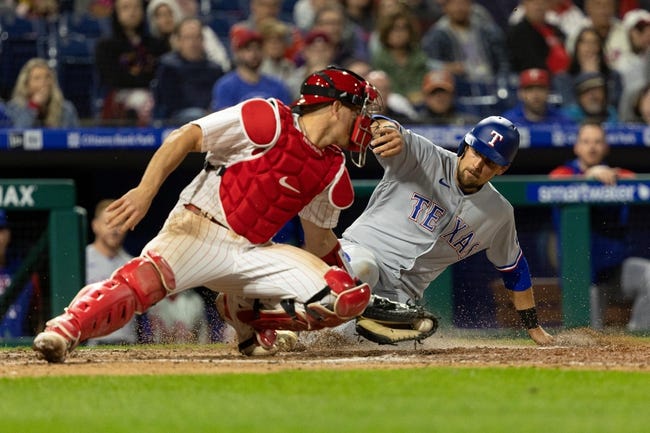 The Texas Rangers and Philadelphia Phillies face off on Wednesday in an MLB showdown at Citzens Bank Park. In the first game of the series on Tuesday, it was the Rangers that secured the 6-4 victory.

The Rangers sit with a 9-14 record overall but they have won three games in a row. Over the last three games the Rangers have given up only eight runs total, and in this game, they are going to need good pitching again. To start the season the Rangers pitching was an issue, so maybe they are finally turning the corner. Adolis Garcia has been the top offensive player hitting four home runs and driving in 18 RBIs.

On the other side of this matchup is the Philadelphia Phillies who have been a disappointment to start the season sitting with an 11-13 record overall. The Phillies have lost two games in a row and during those two games they have given up 16 runs total. The Phillies bats have been inconsistent which has put even more pressure on the pitching. Kyle Schwarber has been the top player for the Phillies hitting seven home runs and driving in 16 RBIs.

Getting the start for the Rangers will be Martin Perez who sits with an 0-2 record and an ERA of 3.00. In his last start against the Astros he went seven innings giving up two hits and one earned run.

On the mound for the Phillies will be Zack Wheeler who sits with a 1-3 record and an ERA of 5.79. In his last start against the Rockies, he went six innings giving up one hit and zero runs.

The Rangers are 1-7 in Perez’s last 8 starts following a team loss in their previous game. The under is 5-0 in Wheelers last 5 starts following a Quality Start in his last appearance. The over is 4-0 in the Phillies' last games played on Wednesday.