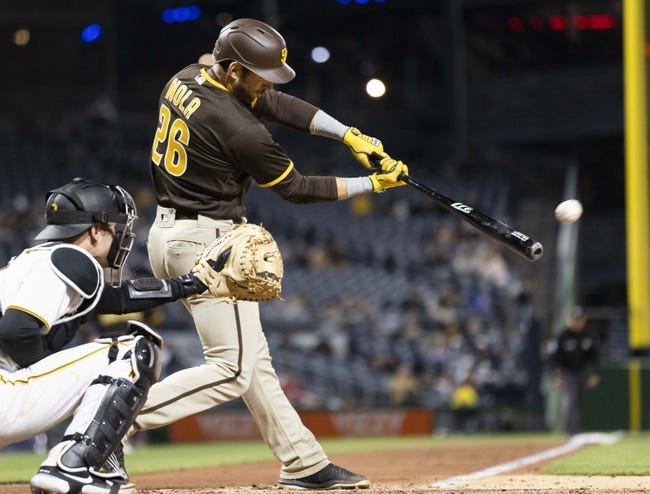 The San Diego Padres face the Pittsburgh Pirates on Saturday, April 30th, 2022 at PNC Park for game two of a three-game series.

The San Diego Padres took down the Pittsburgh Pirates by the final score of 7-3 on Friday night as they earned their fourth-straight victory. The Padres were down early on as two quick runs in the first inning put the Buckos on top, 2-0, but that lead would be erased with one swing of the bat in the third inning as Ha-Seong Kim hit a two-run shot. The Padres scored two runs in the fifth and two more in the sixth to take a commanding lead and went on to win their 14th game of the season. San Diego is now 14-7 this season and an impressive 8-3 on the road as well. The Pirates have lost four straight games and are now four games below .500 at 8-12 this season. The Pirates are currently in a tie for third place in the NL Central with the Cubs, while the Padres are in second place in the NL West.

The San Diego Padres are projected to bring left-hander Sean Manaea to the mound to face the Pirates. Manaea is 2-2 with a 3.47 ERA and a 1.03 WHIP through his first 23.1 innings this season. Manaea has 24 strikeouts compared to eight walks this year, and his low WHIP has made it difficult for the opposition to do too much damage on him in 2022.

The Pittsburgh Pirates are set to bring right-hander JT Brubaker to the bump to take on the Padres. Brubaker is 0-2 with a 6.46 ERA and a 1.63 WHIP in his first 15.1 innings of work this season. Brubaker has had issues with the walk this year, as he has allowed 11 free passes in only 15.1 innings. Brubaker will face a red hot and very tough Padres lineup on Saturday.

I like the Padres here on the run line as they have been the far better club as of late and they have the far superior pitcher in my opinion as well. The Pirates need to break this losing streak before I can back them again, especially with the way the bullpen has looked lately.