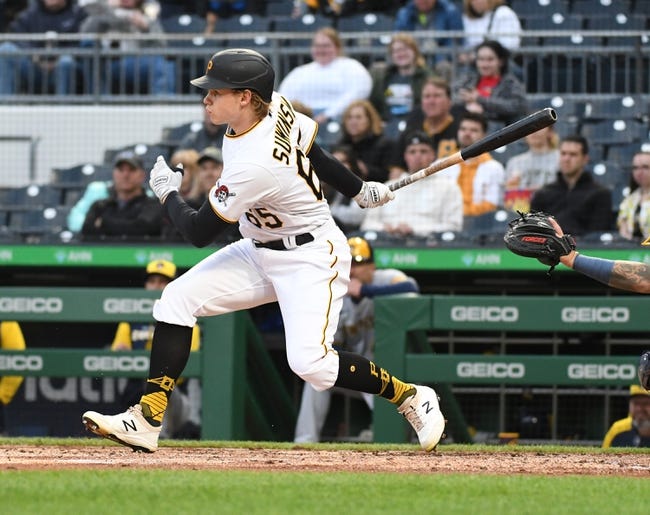 The Milwaukee Brewers face the Pittsburgh Pirates on Wednesday, April 27th, 2022 at PNC Park for game two of a three-game series.

The Brewers and Pirates were involved in quite the offensive shootout on Tuesday night as the final score was 12-8 in favor of the Brew Crew. The Brewers took the lead early as Willy Adames hit a two-run shot in the first inning. It ended up being a career night for the shortstop Adames, as he went 4-5 with two home runs and seven RBIs in the win. The Brewers and Pirates combined for 27 base hits in the game and both teams used four relievers out of the bullpen as well. The Brewers improved to 11-7 with the win and are now 6-4 on the road in 2022. With the Cardinals' loss to the Mets on Tuesday night, the Brewers are now in sole possession of first place in the NL Central standings. The Pirates are back under .500 at 8-9 this season and are in third place in the division standings.

The Milwaukee Brewers are projected to bring left-hander Aaron Ashby to the mound to face the Pirates. Ashby is 0-2 with a 3.18 ERA in his first 11.1 innings of work this season. Ashby is one of the top pitching prospects for the Brewers and has done well in the 2022 season thus far. Ashby will look for his first win of the season against a Pirates lineup that has been solid against left-handed pitching this season.

The Pittsburgh Pirates are projected to send right-hander Bryse Wilson to the bump to take on the Brewers. Wilson is 0-0 with a 6.35 ERA in his first 11.1 innings with his new club. Wilson has allowed more walks (8) than he has earned strikeouts (6), which is usually a bad sign to see from a starting pitcher. Wilson is facing a tough Brewers lineup in this one and it could be another short start for him on Wednesday.

I like the Brewers on the run-line here as I cannot back Bryse Wilson in his current form. I think Milwaukee's offense shows up yet again on Wednesday, even if it is not to the extent we saw in game one of this series.