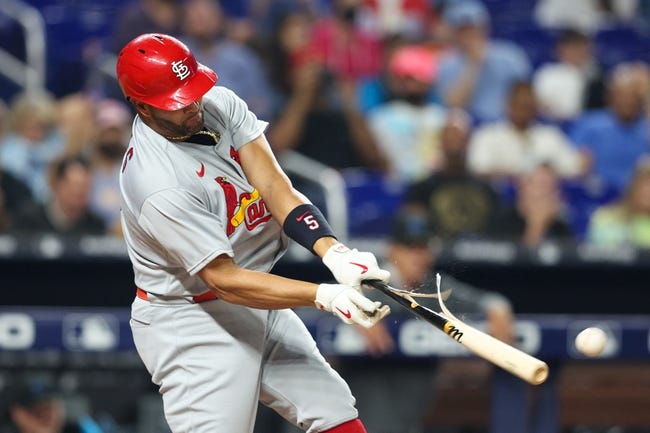 The St. Louis Cardinals face the Miami Marlins on Wednesday, April 20th, 2022 at loanDepot Park for game two of a three-game series.

The St. Louis Cardinals took down the Miami Marlins by the final score of 5-1 on Tuesday night. The Cardinals bats got things going early on as the Cards jumped out to an early 5-0 lead inside the first five innings of the contest. The Marlins ran into a strong start by Adam Wainwright, as Miami was not able to score until the bottom of the sixth for its one and only run. The Marlins did have eight hits as a team, which was as many as the Cardinals had, but the Marlins left eight men on base and hit 0-6 with runners in scoring position in a frustrating offensive performance for Miami. The Marlins have had issues hitting with runners in scoring position this season at a consistent rate, and it has hurt the Marlins' offense as a whole.

The St. Louis Cardinals are projected to start right-hander Miles Mikolas on the mound for game two of this series. Mikolas is 1-0 with a 2.61 ERA and a 1.16 WHIP through his first two starts of the year. Mikolas has not allowed a home run this year and has only conceded three walks through 10.1 innings of work. Mikolas' strikeout numbers are below league-average for starters, but they are about par with Mikolas' career K/9 rating.

The Miami Marlins are set to bring right-hander Sandy Alcantara to the bump to take on the Cardinals. Alcantara is 1-0 with a 3.18 ERA and a 1.41 WHIP in his first two outings of 2022. Alcantara is coming off an impressive outing against the Phillies in which he ran into a bit of trouble in the first inning but was able to get through a big jam and pitch virtually lights out the rest of the way.