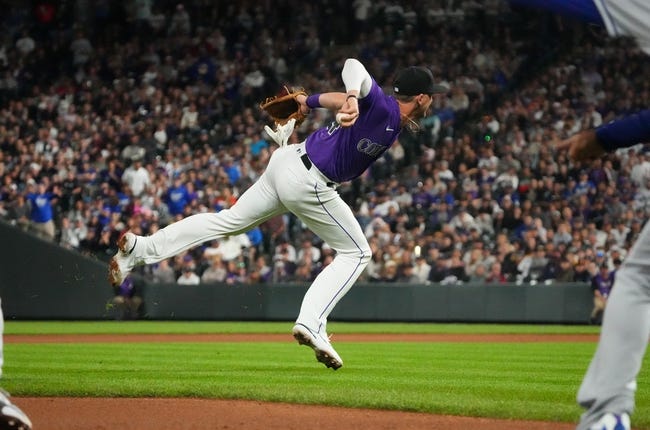 The Los Angeles Dodgers face the Colorado Rockies on Sunday, April 10th, 2022 at Coors Field for game three of a three-game series.

The Colorado Rockies defeated the Los Angeles Dodgers by the final score of 3-2 on Saturday night. The Rockies are back to .500 on the season as these two teams have split the first two games of this series. The Rockies played 15 games above .500 at Coors Field last season, and it can be expected that Colorado will have some success at home yet again in 2022. Taking down this loaded Dodgers team is no easy feat, especially when you look at the fact that need to find the win late. Connor Joe's solo home run with two outs in the bottom of the eighth gave the Rockies the 3-2 lead and closer Daniel Bard was able to shut the door in the 9th for Colorado's first win on the young campaign. This will be the rubber match of this series and these two teams will not face each other for over two months afterward.

The Los Angeles Dodgers are set to bring left-hander Julio Urias to the mound for the third game of this series. Urias led the National League in wins last season with his fantastic 20-3 record. 10 years back, a record like that alone would be good enough for a Cy Young award, but Urias still finished in the top-8 in voting. Urias struggled quite a bit in spring training this year as he posted a 9.00 ERA in 8.0 innings allowing three home runs. The Rockies were in the top-10 in the league in team OPS against left-handed pitching for most of the season in 2021, and even though they lost Trevor Story, a powerful right-handed bat, they replaced him with another power righty in Kris Bryant.

The Colorado Rockies are projected to bring right-hander Antonio Senzatela to the bump to take on the Dodgers. Senzatela had mixed results last year with a 4-10 record and an ERA of 4.42. Senzatela's numbers were fine in 2021, especially for a starter that pitches half of the time in Coors Field.

I like the Rockies here on the run line getting the 1.5 runs. I think this game is a one-run contest either way, just as it was on Saturday night. I think the Rockies can get to Urias early and I think Senzatela does enough to keep his team competitive here.