The Washington Nationals face the New York Mets on Sunday, April 25th at Citi Field for game three of a three-game series.

The Washington Nationals took down the New York Mets by the final score of 7-1. The Nats hit Marcus Stroman early, scoring four earned runs in the first four innings of the game. Joe Ross tossed 6.0 solid innings with four strikeouts and only one earned run allowed. The Nationals did not hit a single home run despite scoring the seven runs, but the Nats did rack up 10 hits and five walks. The Nationals and Mets are not heading into the rubber match of this three-game series, as the Mets took the first game of the series. The Nationals are now 8-10 on the year and have won three of their last four games. The New York Mets have lost four of their last five and are back to .500 at 8-8, which is still good for first place in the NL East standings, while the Nationals remain in last place in the division standings.

The Washington Nationals are projected to bring left-hander Patrick Corbin to the mound to face the Mets. Corbin is 0-2 with a 10.95 ERA through his first 12.1 innings of the season with the Nats. Corbin had his best start of the year in his last outing, as he pitched 6.0 innings of shutout baseball against the Cardinals with no walks allowed and five strikeouts.

The New York Mets are projected to send right-hander Taijuan Walker to the bump for the third game of the series. Walker is 0-1 with a 3.21 ERA through his first 14.0 innings of the season in his first year as a Met. Walker allowed two earned runs and three runs total in his last outing against the Cubs in a 3-1 Mets loss. Walker has been decent in his first three starts, but his 1.43 WHIP is a bit worrisome.

The Mets are too big of favorites for me in this spot and I am going to take the Nats on value alone. We saw what Patrick Corbin can do in his last start against St. Louis, and I think we see more of that on Sunday. 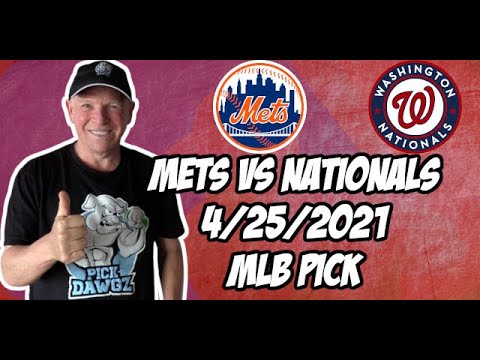