The Toronto Blue Jays face the Tampa Bay Rays on Sunday, April 25th at Tropicana Field for game three of a three-game series.

The Tampa Bay Rays defeated the Toronto Blue Jays by the final score of 5-3 in game two of this series on Saturday. The Blue Jays took an early lead on a three-run home run by Randall Grichuk in the first inning, but the Rays were able to tie the game in the bottom of the sixth off of a Mike Brosseau homer. The Rays scored the go-ahead runs in the bottom of the eighth and Andrew Kittredge was able to pick up the save. The Rays have now tied up the series at 1-1 and the rubber match is set for Sunday. The Toronto Blue Jays are now 9-11 on the year and the Rays are back over .500 at 11-10 and are in second place in the AL East standings.

The Toronto Blue Jays are projected to bring left-hander Hyun Jin Ryu to the mound to face the Rays. Ryu is 1-2 with a 3.00 ERA through his first 24.0 innings of the season. Ryu allowed four earned runs in his last outing against the Boston Red Sox. Ryu allowed eight hits and only struck out two batters, as it was certainly his worst start of the year.

The Tampa Bay Rays are set to send their prospect in right-hander Luis Patino. Patino was acquired in the Blake Snell trade with the Padres this off-season and he has a lot of expectations heading into this season. Patino made three appearances in spring training and did not allow an earned run in 3.0 innings of work. Patino allowed just a single hit and struck out one batter as well during the spring also.

I am going to take a shot with the Rays and the youngster Patino here, as I was not impressed with Ryu in his last start and need to see more of him before I back him once more. Patino and the Rays hold all the value in my eyes. 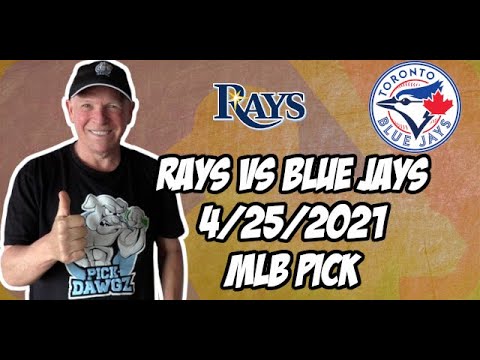