The Los Angeles Dodgers will host the San Diego Padres in an NL West showdown on Sunday night. It will be the finale of a four-game set at Dodger Stadium.

The Padres lost for the first time this series on Saturday. Pierce Johnson got the loss after failing to record an out in relief of starter Blake Snell, giving up 3 runs in the process. From the dish they had 8 hits and were 2-7 with runners in scoring position. Fernando Tatis Jr was one of the few bright spots in the game, homering twice off Trevor Bauer. To start the year, the Padres have a .232 team batting average and .685 OPS. Tatis Jr leads the team with 6 home runs.

Getting the start for the Padres in this one will be righty Joe Musgrove. To start the season, he is 2-2 with a 1.04 ERA, 0.54 WHIP and 37 strikeouts. Against this Dodgers lineup in his career, he has allowed a .210 average with 5 strikeouts in 36 at bats.

The Dodgers have been slumping despite getting the win last time out. They will be facing Musgrove in this one, and he has been lights out to start the season. Dustin May picked up right where he left off in 2020 and has gotten off to a solid start as well. The bullpens rank in the top 11 in ERA, so runs may be tough to come by here. Give me the under. 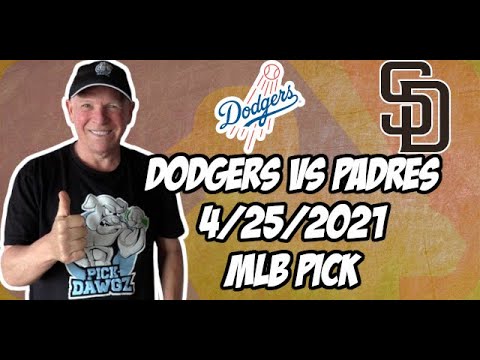